What is a fork bomb?

A fork is a system call used in Unix and Linux systems that takes an existing process (a.k.a, a parent) and replicates it, forming a new process (a.k.a, a child). This allows both processes to carry out unique tasks simultaneously.

A fork bomb (also known as a “rabbit virus”) is a denial of service (DoS) attack in which the fork system call is recursively used until all system resources execute a command. The system eventually becomes overloaded and is unable to respond to any input. 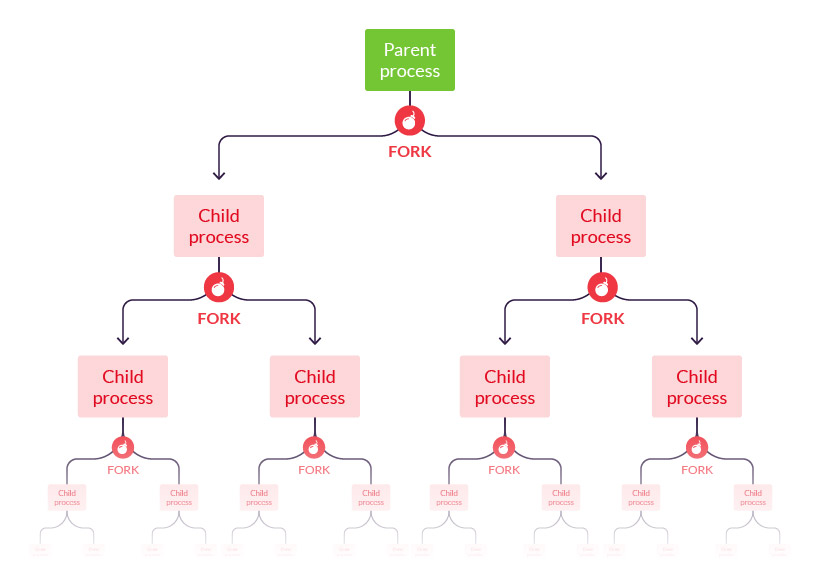 In contrast to most DoS assaults, which often occur by flooding network or computer resources externally, a fork bomb uses commands within the system it’s attempting to bring down. Sometimes it can even be self-inflicted.

Because a fork loop consumes CPU and memory, system resources are typically depleted long before an operating system reaches the maximum allowed processes. This results in “kernel panic”, i.e., the core operating system (the kernel) cannot cope and crashes.

For the majority of systems, a freeze lasts until a machine is restarted, and often a hard reboot is required to regain control. Data loss is highly likely. Some kernels might have pre-set limits that eventually allow an administrator access to the system

All Unix, Linux, or Unix-like operating systems are potentially vulnerable to a fork bomb attack, including Ubuntu, Debian, Red Hat, or AIX.

Executing the command creates a child process, which then repeats itself in an infinite loop. The result is a system that cannot respond, because all its resources are used creating these empty processes.

Preventing fork bombs is done by limiting the maximum number of processes a user can own. This is accomplished by:

It should be noted that even if the correct limits.conf setting is in place, a superuser and any process with administrative privileges can still initiate a fork bomb attack.

Even with modern operating systems, there is no perfect way to prevent a fork bomb. However, enforcing general security best practices and preventing untrusted software to run on root can block the vast majority of fork bomb attack scenarios.