Spoofing is an impersonation of a user, device or client on the Internet. It’s often used during a cyberattack to disguise the source of attack traffic.

The most common forms of spoofing are:

What is IP address spoofing

Computer networks communicate through the exchange of network data packets, each containing multiple headers used for routing and to ensure transmission continuity. One such header is the ‘Source IP Address’, which indicates the IP address of the packet’s sender. 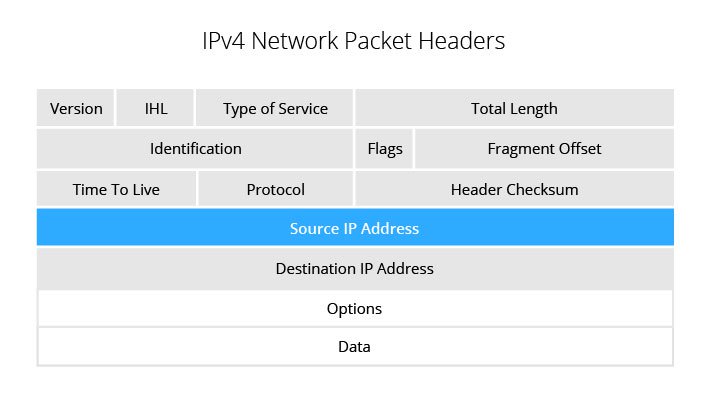 IP address spoofing is the act of falsifying the content in the Source IP header, usually with randomized numbers, either to mask the sender’s identity or to launch a reflected DDoS attack, as described below. IP spoofing is a default feature in most DDoS malware kits and attack scripts, making it a part of most network layer distributed denial of service DDoS attacks.

IP address spoofing is used for two reasons in DDoS attacks: to mask botnet device locations and to stage a reflected assault.

A botnet is a cluster of malware-infected devices remotely controlled by perpetrators without the knowledge of their owners. They can be instructed to collectively access a given domain or server, providing perpetrators with the computing and networking resources to generate huge traffic floods. Such floods enable botnet operators, (a.k.a. shepherds), to max out their target’s resource capacity, resulting in server downtime and network saturation.

By using spoofed IP addresses to mask the true identities of their botnet devices, perpetrators aim to:

A reflected DDoS attack uses IP spoofing to generate fake requests, ostensibly on behalf of a target, to elicit responses from under protected intermediary servers. The perpetrator’s goal is to amplify their traffic output by triggering large responses from much smaller requests.

For application layer connections to be established, the host and visitor are required to engage in a process of mutual verification, known as a TCP three-way handshake.

The process consists of the following exchange of synchronization (SYN) and acknowledgement (ACK) packets:

Source IP spoofing makes the third step of this process impossible, as it prohibits the visitor from ever receiving the SYN-ACK reply, which is sent to the spoofed IP address.

Since all application layer attacks rely on TCP connections and the closure of the 3-way handshake loop, only network layer DDoS attacks can use spoofed addresses.

In security research, IP data derived from network layer assaults is often used to identify the country of origin of attacker resources. IP address spoofing, however, makes this data unreliable, as both the IP address and geolocation of malicious traffic is masked.

When reading reports relying solely on network IP data, it’s necessary to be aware of these limitations. For example, a report by a mitigation provider that doesn’t protect against application layer attacks can’t be relied on to provide accurate locations of botnet devices.

As a result, any substantial research into botnet countries of origin can only be based on application layer attack data.

See how Imperva DDoS Protection can help you with IP spoofing.

As mentioned, IP address spoofing is commonly used to bypass basic security measures that rely on IP blacklisting— the blocking of addresses known to have been previously involved in an attack.

For example, a mitigation service can employ DPI to observe a DDoS traffic stream and identify an influx of packets with suspiciously-identical TTLs and Total Length headers that don’t match a normal pattern. By tracking such small abnormalities, the service can create a granular profile of an attacking packet and use it to weed out malicious traffic without impacting regular visitor flow.

The downside of DPI is that the process is very resource intensive. When performed on scale, such as during a DDoS attack, DPI is likely to cause performance degradation—sometimes even making the protected network almost completely unresponsive.

To overcome this, Imperva scrubbing is performed by a purpose-built mitigation hardware (codename Behemoth) that runs DPI against ~100 million packets per second.

A cluster of Behemoth scrubbers mitigates a 470 Gbps DDoS attack—one of the largest on record.

Built from the ground up, every Behemoth scrubber provides granular visibility of all incoming data, thus ensuring that attack traffic never enters your network. Meanwhile, your valid visitor traffic flows through unimpeded.