What Is the OSI Model

The Open Systems Interconnection (OSI) model describes seven layers that computer systems use to communicate over a network. It was the first standard model for network communications, adopted by all major computer and telecommunication companies in the early 1980s

The modern Internet is not based on OSI, but on the simpler TCP/IP model. However, the OSI 7-layer model is still widely used, as it helps visualize and communicate how networks operate, and helps isolate and troubleshoot networking problems.

OSI was introduced in 1983 by representatives of the major computer and telecom companies, and was adopted by ISO as an international standard in 1984. 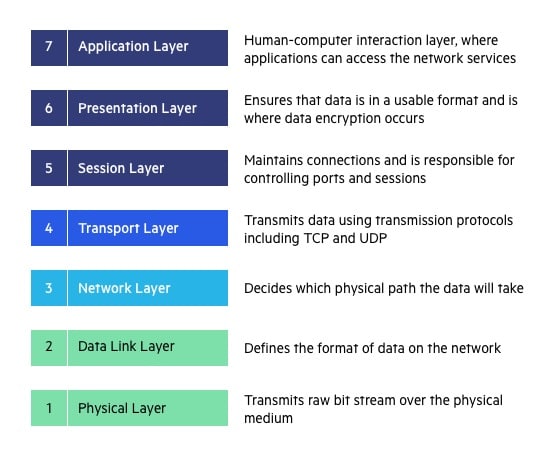 We’ll describe OSI layers “top down” from the application layer that directly serves the end user, down to the physical layer.

The session layer creates communication channels, called sessions, between devices. It is responsible for opening sessions, ensuring they remain open and functional while data is being transferred, and closing them when communication ends. The session layer can also set checkpoints during a data transfer—if the session is interrupted, devices can resume data transfer from the last checkpoint.

The transport layer takes data transferred in the session layer and breaks it into “segments” on the transmitting end. It is responsible for reassembling the segments on the receiving end, turning it back into data that can be used by the session layer. The transport layer carries out flow control, sending data at a rate that matches the connection speed of the receiving device, and error control, checking if data was received incorrectly and if not, requesting it again.

The network layer has two main functions. One is breaking up segments into network packets, and reassembling the packets on the receiving end. The other is routing packets by discovering the best path across a physical network. The network layer uses network addresses (typically Internet Protocol addresses) to route packets to a destination node.

The data link layer establishes and terminates a connection between two physically-connected nodes on a network. It breaks up packets into frames and sends them from source to destination. This layer is composed of two parts—Logical Link Control (LLC), which identifies network protocols, performs error checking and synchronizes frames, and Media Access Control (MAC) which uses MAC addresses to connect devices and define permissions to transmit and receive data.

The OSI model helps users and operators of computer networks: 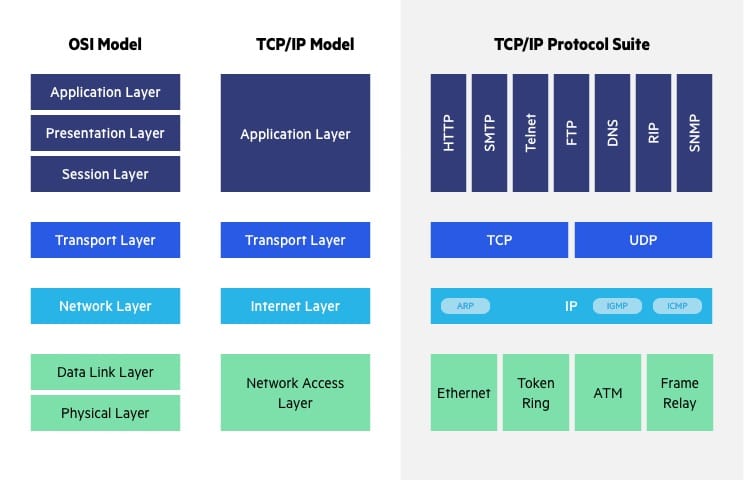 The Transfer Control Protocol/Internet Protocol (TCP/IP) is older than the OSI model and was created by the US Department of Defense (DoD). A key difference between the models is that TCP/IP is simpler, collapsing several OSI layers into one:

See how Imperva Web Application Firewall can help you with application security.

To secure applications and networks across the OSI stack, Imperva provides multi-layered protection to make sure websites and applications are available, easily accessible and safe. The Imperva application security solution includes: