The benefits of an SSL/TLS connection include:

Transport layer security was released in 1999 as an updated version of SSL. The protocol has been shown to plug certain vulnerabilities in SSL 3.0, including those exploited in the 2014 POODLE attack in which attackers decrypted and extracted information from inside an encrypted transaction.

An SSL/TLS certificate is a data file that encrypts information sent to a server and authenticates the identity of a website. Applications, browsers and operating systems maintain a list of root certificates provided by a trusted Certificate Authority (CA).

Each SSL/TLS certificate has to be hosted on a unique IP address. Because CDNs aren’t able to allocate a standalone IP for every website using their service, multi-domain certificates are typically used.

However, many CDNs offer premium features that enable the customer to rent an individual IP address, which is especially useful for an organization that wants to use their own custom/EV certificates.

For an SSL/TLS connection to be established, the following process must take place: 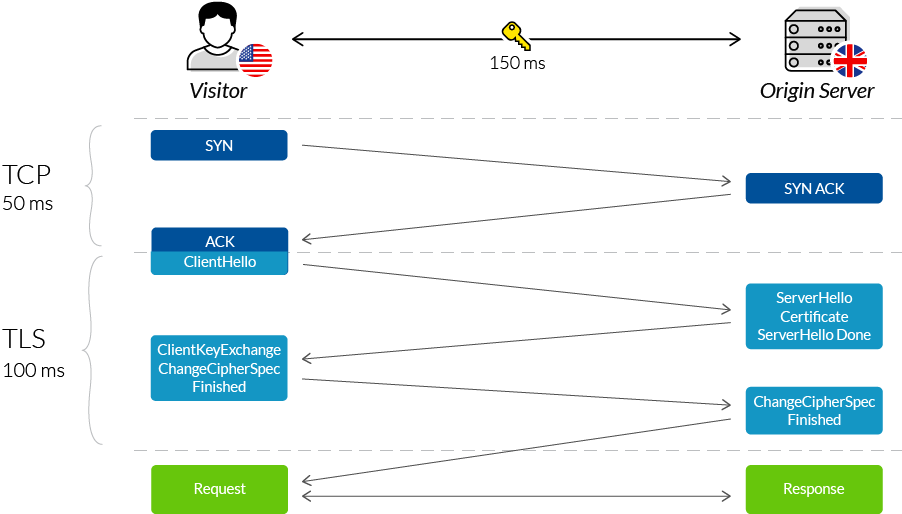 The Benefits of Using CDNs with SSL/TLS

When a secure socket layer client connects to your website via a CDN, the SSL handshake occurs between the client and the CDN proxy server – not the origin server hosting your site.

In parallel, a second encrypted communication channel is open between CDN and your origin.

Using the CDN to service SSL/TLS traffic has the following advantages:

A CDN reduces the round trip time (RTT) experienced by your users, because they interact with a local CDN proxy server and not directly with your (likely more remotely located) origin.

This has significant benefits for the speed at which a transport layer security session can be established, since the TLS/SSL handshake involves six exchanges, equal to three times the user’s RTT.

For example, a CDN that reduces RTT from 50ms to 20ms will reduce the TLS handshake time from 150ms (three times the RTT) to just 60ms, (as seen in the image below).

In addition, CDNs use optimized settings, such as False Start and Session Resumption to improve performance. 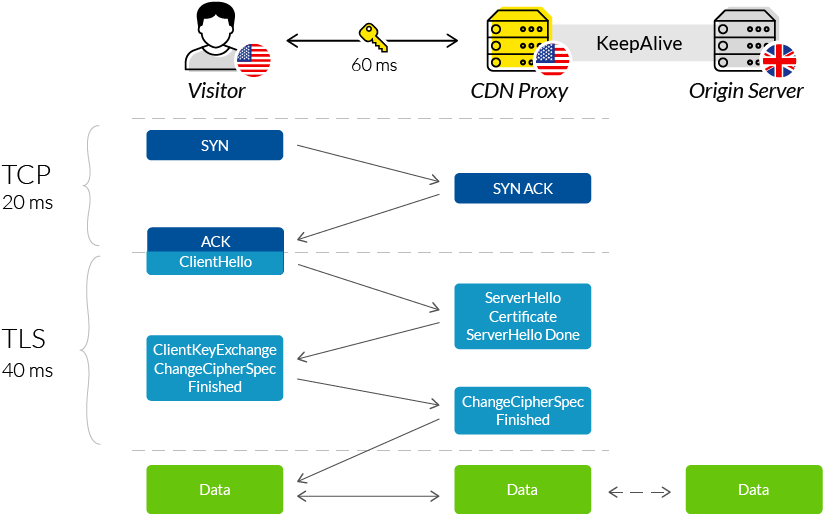 When using a CDN, the user’s SSL/TLS client connects to the CDN’s SSL certificate, not your own certificate. A CDN’s certificate is usually of the highest grade, i.e., A+.

This means that using a CDN will provide your users with the highest level of SSL security, regardless of the certificate that’s being used on your origin server.