What is Ransomware Attack?

Ransomware is a type of malware attack in which the attacker locks and encrypts the victim’s data, important files and then demands a payment to unlock and decrypt the data.

This type of attack takes advantage of human, system, network, and software vulnerabilities to infect the victim’s device—which can be a computer, printer, smartphone, wearable, point-of-sale (POS) terminal, or other endpoint.

There are thousands of strains of ransomware malware. Below we list a few malware examples that made a global impact and caused widespread damage.

WannaCry is an entrypting ransomware that exploits a vulnerability in the Windows SMB protocol, and has a self-propagation mechanism that lets it infect other machines. WannaCry is packaged as a dropper, a self-contained program that extracts the encryption/decryption application, files containing encryption keys, and the Tor communication program. It is not obfuscated and relatively easy to detect and remove. In 2017 WannaCry spread rapidly across 150 countries, affecting 230,000 computers and causing an estimated $4 billion in damages.

Cerber is ransomware-as-a-service (RaaS), and is available for use by cybercriminals, who carry out attacks and spread their loot with the malware developer. Cerber runs silently while it is encrypting files, and may try to prevent antivirus and Windows security features from running, to prevent users from restoring the system. When it successfully encrypts files on the machine, it displays a ransom note on the desktop wallpaper.

Locky is able to encrypt 160 file types, primarily files used by designers, engineers and testers. It was first released in 2016. It is primarily distributed by exploit kits or phishing—attackers send emails that encourage the user to open a Microsoft Office Word or Excel file with malicious macros, or a ZIP file that installs the malware upon extraction.

Cryptolocker was released in 2017, and affected over 500,000 computers. It typically infects computers through email, file sharing sites, and unprotected downloads. It not only encrypts files on the local machine, but can also scan mapped network drives, and encrypt files it has permission to write to. New variants of Crypolocker are able to elude legacy antivirus software and firewalls.

Petya is ransomware that infects a machine and encrypts an entire hard drive, by accessing the Master File Table (MFT). This makes the entire disk inaccessible, although the actual files are not encrypted. Petya was first seen in 2016, and was spread mainly through a fake job application message linking to an infected file stored in Dropbox. It only affected Windows computers.

Petya requires the user to agree to give it permission to make admin-level changes. After the user agrees, it reboots the computer, shows a fake system crash screen, while it starts encrypting the disk behind the scenes. It then shows the ransom notice.

The original Petya virus was not highly successful, but a new variant, named NotPetya by Kaspersky Labs, proved to be more dangerous. NotPetya is equipped with a propagation mechanism, and is able to spread without human intervention.

NotPetya originally spread using a backdoor in accounting software used widely in the Ukraine, and later used EternalBlue and EternalRomance, vulnerabilities in the Windows SMB protocol. NotPetya not only encrypts the MFT but also other files on the hard drive. While encrypting the data, it damages it in such a way that it cannot be recovered. Users who pay the ransom cannot actually get their data back.

Ryuk infects machines via phishing emails or drive-by downloads. It uses a dropper, which extracts a trojan on the victim’s machine and establishes a persistent network connection. Attackers can then use Ryuk as a basis for an Advanced Persistent Threat (APT), installing additional tools like keyloggers, performing privilege escalation and lateral movement. Ryuk is installed on each additional system the attackers gain access to.

GrandCrab was released in 2018. It encrypts files on a user’s machine and demands a ransom, and was used to launch ransomware-based extortion attacks, where attackers threatened to reveal victims’ porn-watching habits. There are several versions, all of which target Windows machines. Free decryptors are available today for most versions of GrandCrab.

Bad Bots on the Attack: Guidance to Protect Against Online Fraud

The device is infected when the victim clicks a link, visits a web page, or installs a file, application, or program that includes malicious code designed to covertly download and install the ransomware. This can happen in a variety of ways:

How Does Ransomware Work?

After a device is exposed to the malicious code, the ransomware attack proceeds as follows. Ransomware can remain dormant on a device until the device is at its most vulnerable, and only then execute an attack. 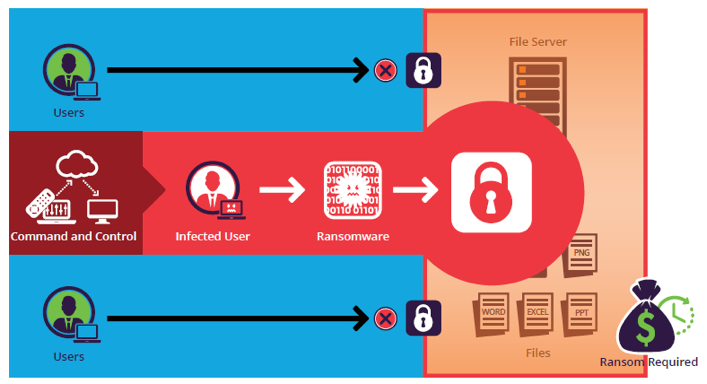 Here are several best practices that can help you prevent and protect against Ransomware infections in your organization:

Antivirus is an obvious first step in ransomware protection, but legacy antivirus tools can only protect against some ransomware variants.

Regularly backup data to an external hard-drive, using versioning control and the 3-2-1 rule (create three backup copies on two different media with one backup stored in a separate location). If possible, disconnect the hard-drive from the device to prevent encryption of the backup data.

Train employees to recognize social engineering emails, and conduct drills to test if employees are able to identify and avoid phishing. Use spam protection and endpoint protection technology to automatically block suspicious emails, and block malicious links if user does end up clicking on them.

Use a firewall or web application firewall (WAF), Intrusion Prevention / Intrusion Detection Systems (IPS/IDS), and other controls to prevent ransomware from communicating with Command & Control centers.

Use real-time alerting and blocking to automate identifying ransomware-specific read/write behavior and then blocking users and endpoints from further data access.

Use deception-based detection, which strategically plants hidden files on file storage systems to identify ransomware encryption behaviors at the earliest attack stage. Any write/rename actions on the hidden files automatically triggers a block of the infected user or endpoint, while continuing to allow access by uninfected users and devices.

Use granular reporting and analysis to provide detailed audit trail support for forensic investigations into who, what, when, where, and how users access files. 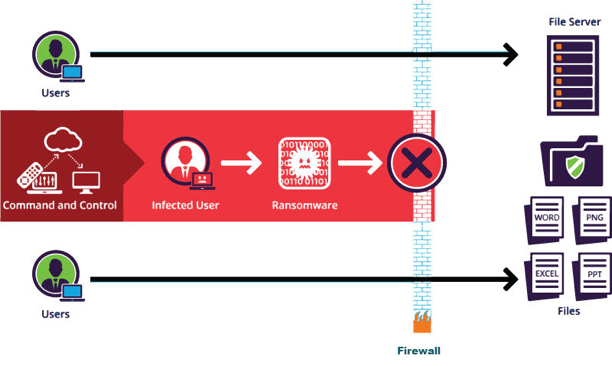 Ransomware Removal: How to Mitigate an Active Ransomware Infection

If you detected a Ransomware infection in your network, here are the immediate steps you should take to mitigate the ransomware threat:

See how Imperva File Security can help you with ransomware attacks.

Imperva File Security can detect ransomware activity before it does widespread damage, using policy-based monitoring and deception technology. Imperva identifies suspicious file access behavior in real time, and quarantines infected users or devices which may be affected by ransomware. It also provides data that can help security teams investigate and report on ransomware activity.

In addition, Imperva protects against server-side ransomware attacks, with the industry’s leading web application firewall (WAF), which can detect and block ransomware when it attempts to contact its Command & Control center.

In addition to ransomware detection and prevention, Imperva’s data security solution protects your data wherever it lives—on premises, in the cloud and in hybrid environments. It also provides cyber security and IT teams with full visibility into how the data is being accessed, used, and moved around the organization.