WP What is a DNS Hijacking | Redirection Attacks Explained | Imperva

What is a DNS hijacking / redirection attack

Domain Name Server (DNS) hijacking, also named DNS redirection, is a type of DNS attack in which DNS queries are incorrectly resolved in order to unexpectedly redirect users to malicious sites. To perform the attack, perpetrators either install malware on user computers, take over routers, or intercept or hack DNS communication.

DNS hijacking can be used for pharming (in this context, attackers typically display unwanted ads to generate revenue) or for phishing (displaying fake versions of sites users access and stealing data or credentials).

Many Internet Service Providers (ISPs) also use a type of DNS hijacking, to take over a user’s DNS requests, collect statistics and return ads when users access an unknown domain. Some governments use DNS hijacking for censorship, redirecting users to government-authorized sites.

There are four basic types of DNS redirection: 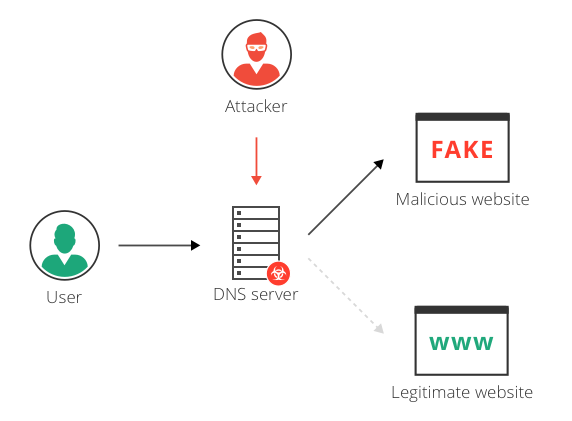 Cache poisoning is another way to achieve DNS spoofing, without relying on DNS hijacking (physically taking over the DNS settings). DNS servers, routers and computers cache DNS records. Attackers can “poison” the DNS cache by inserting a forged DNS entry, containing an alternative IP destination for the same domain name. The DNS server resolves the domain to the spoofed website, until the cache is refreshed.

See how Imperva DDoS Protection can help you with DNS hijacking.

Mitigation for name servers and resolvers

A DNS name server is a highly sensitive infrastructure which requires strong security measures, as it can be hijacked and used by hackers to mount DDoS attacks on others:

End users can protect themselves against DNS hijacking by changing router passwords, installing antivirus, and using an encrypted VPN channel. If the user’s ISP is hijacking their DNS, they can use a free, alternative DNS service such as Google Public DNS, Google DNS over HTTPS, and Cisco OpenDNS.

Site owners who use a Domain Name Registrar can take steps to avoid DNS redirection of their DNS records: