What is Command Injection?

Command injection is a cyber attack that involves executing arbitrary commands on a host operating system (OS). Typically, the threat actor injects the commands by exploiting an application vulnerability, such as insufficient input validation. 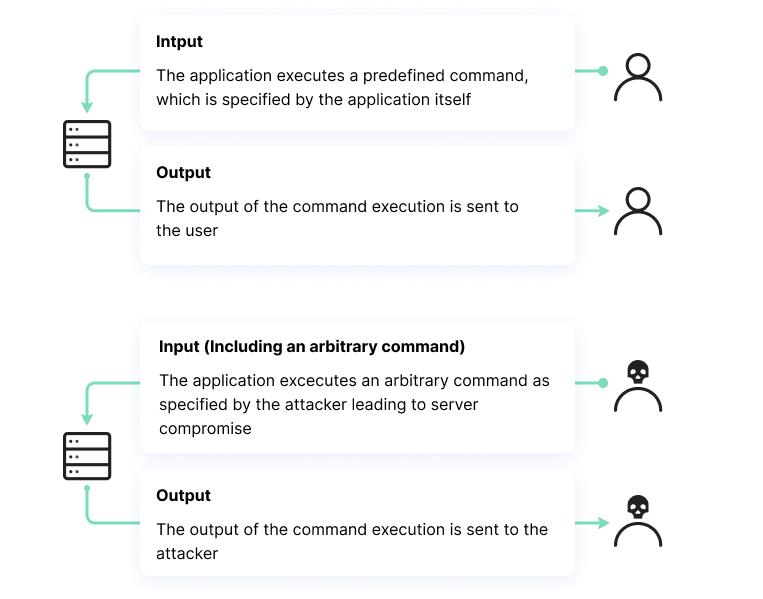 For example, a threat actor can use insecure transmissions of user data, such as cookies and forms, to inject a command into the system shell on a web server. The attacker can then leverage the privileges of the vulnerable application to compromise the server.

Code injection is a generic term for any type of attack that involves an injection of code interpreted/executed by an application. This type of attack takes advantage of mishandling of untrusted data inputs. It is made possible by a lack of proper input/output data validation.

A key limitation of code injection attacks is that they are confined to the application or system they target. If an attacker can inject PHP code into an application and execute it, malicious code will be limited by PHP functionality and permissions granted to PHP on the host machine.

Command injection typically involves executing commands in a system shell or other parts of the environment. The attacker extends the default functionality of a vulnerable application, causing it to pass commands to the system shell, without needing to inject malicious code. In many cases, command injection gives the attacker greater control over the target system.

Here are three examples of how an application vulnerability can lead to command injection attacks. These examples are based on code provided by OWASP.

Here is an example of a program that allows remote users to view the contents of a file, without being able to modify or delete it. The program runs with root privileges:

Although the program is supposedly innocuous—it only enables read-only access to files—it enables a command injection attack. If the attacker passes, instead of a file name, a string like:

The call to system() will fail to execute, and then the operating system will perform recursive deletion of the root disk partition.

The following code snippet determines the installation directory of a certain application using the $APPHOME environment variable and runs a script in that directory.

The problem is that the code does not validate the contents of the initialization script. If the attacker manages to modify the $APPHOME variable to a different path, with a malicious version of the script, this code will run the malicious script. This constitutes a command injection attack.

The following code may be used in a program that changes passwords on a server, and runs with root permissions:

The problematic part of this code is the use of make. While the attacker cannot change the code itself, because it does not accept user inputs, they can modify the $PATH variable. This can cause the command to execute in a different path controlled by the attacker. In that other folder path, the attacker can plant a malicious version of the make binary.

The bottom line of all three examples is that any command that invokes system-level functions like system() and exec() can lend their root privileges to other programs or commands that run within them.

Here are some of the vulnerabilities that commonly lead to a command injection attack.

Some applications may enable users to run arbitrary commands, and run these commands as is to the underlying host.

If an application allows users to upload files with arbitrary file extensions, these files could include malicious commands. On most web servers, placing such files in the webroot will result in command injection.

Server-side code is typically used to deserialize user inputs. If deserialization is performed without proper verification, it can result in command injection.

Many web applications use server-side templates to generate dynamic HTML responses. This makes it possible for attackers to insert malicious server-side templates. SSTI occurs when user input is embedded in a template in an insecure manner, and code is executed remotely on the server.

XXE occurs in applications that use a poorly-configured XML parser to parse user-controlled XML input. This vulnerability can cause exposure of sensitive data, server-side request forgery (SSRF), or denial of service attacks.

Here are several practices you can implement in order to prevent command injections:

See how Imperva DDoS Protection can help you with Command Injection.

Imperva protects against command injection and many other attacks using its market-leading web application firewall (WAF). Imperva WAF, offered both in the cloud and as an on-premise Gateway WAF solution, permits legitimate traffic and prevents bad traffic, safeguarding applications both inside your network and at the edge.

In addition to protecting against command injection, Imperva provides multi-layered protection to make sure websites and applications are available, easily accessible and safe. The Imperva application security solution includes: