What is the ARP Protocol

Address Resolution Protocol (ARP) is a protocol that enables network communications to reach a specific device on the network. ARP translates Internet Protocol (IP) addresses to a Media Access Control (MAC) address, and vice versa. Most commonly, devices use ARP to contact the router or gateway that enables them to connect to the Internet.

The ARP protocol was not designed for security, so it does not verify that a response to an ARP request really comes from an authorized party. It also lets hosts accept ARP responses even if they never sent out a request. This is a weak point in the ARP protocol, which opens the door to ARP spoofing attacks.

ARP only works with 32-bit IP addresses in the older IPv4 standard. The newer IPv6 protocol uses a different protocol, Neighbor Discovery Protocol (NDP), which is secure and uses cryptographic keys to verify host identities. However, since most of the Internet still uses the older IPv4 protocol, ARP remains in wide use.

What is ARP Spoofing (ARP Poisoning)

An ARP spoofing, also known as ARP poisoning, is a Man in the Middle (MitM) attack that allows attackers to intercept communication between network devices. The attack works as follows: 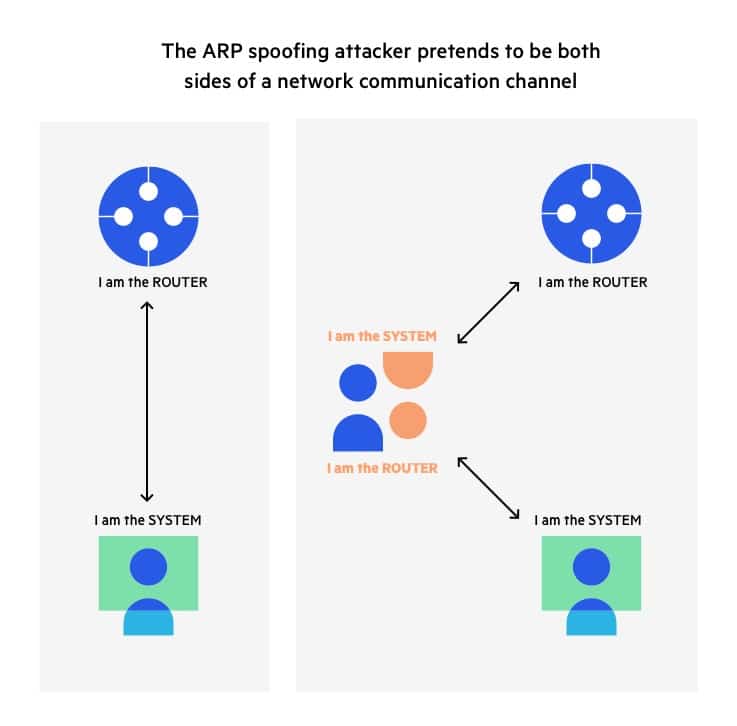 Once the attacker succeeds in an ARP spoofing attack, they can:


How to Detect an ARP Cache Poisoning Attack

Here is a simple way to detect that a specific device’s ARP cache has been poisoned, using the command line. Start an operating system shell as an administrator. Use the following command to display the ARP table, on both Windows and Linux:

If the table contains two different IP addresses that have the same MAC address, this indicates an ARP attack is taking place. Because the IP address 192.168.5.1 can be recognized as the router, the attacker’s IP is probably 192.168.5.202.

To discover ARP spoofing in a large network and get more information about the type of communication the attacker is carrying out, you can use the open source Wireshark protocol.

Here are a few best practices that can help you prevent ARP Spoofing on your network: