WP The State of Vulnerabilities in 2019 | Imperva

Home > Blog > The State of Vulnerabilities in 2019

The State of Vulnerabilities in 2019

As a web application firewall provider, part of our job at Imperva is to continually monitor for new security vulnerabilities. To do this, we use internal software that collects information from various data sources such as vulnerability databases, newsletters, forums, social media and more, integrating it into a single repository, and assessing each vulnerability’s priority. Having this kind of data puts us in a unique position to provide an analysis of all web applications and database vulnerabilities throughout the year, view trends, and notice significant changes in the security landscape. As we did last year, we took a look back at 2019 to understand the changes and trends in web application and database security over the past year.

We often face a situation in which one vulnerability can be exploited in different ways and lead to different results. In such cases, we decided to assign this vulnerability to all the categories in which it may manifest. We believe that such an approach will present the overall picture in the most accurate way.

As expected, the number of vulnerabilities in API (Application Programming Interface), which is still a growing market, continues to grow, although not as fast as we would have expected based on the previous year. In the content management system category, WordPress was not only the most popular platform but also dominated the number of new vulnerabilities in 2019. In the server-side technologies category, PHP – the most prevalent server-side language – was associated with the highest number of vulnerabilities. MySQL appears to be ahead of all others popular databases, in terms of new vulnerabilities discovered in the last year, with 130 (59%) of the total vulnerabilities. The most common vulnerability in databases was Denial-of-Service (DoS). We drew an interesting conclusion from the social media analysis we conducted on twitter.com. The analysis revealed that the CVSS score, which most of the industry relies on in order to prioritize systems patching, doesn’t necessarily correlate with the vulnerability popularity (at least in social media).

The dominant category this year was, by far, injection, with 5,730 (28.1%) of the total vulnerabilities seen in 2019 – a 21% increase on last year. When talking about injection vulnerabilities, the first thing that jumps to mind is SQL injection. When drilling down into the data, however, we saw remote command execution (RCE) emerge as the bigger issue, with 3,869 vulnerabilities (19%), compared to 1,610 vulnerabilities (8%) for SQLi. This was alongside 75 vulnerabilities related to local or remote file inclusion, and 607 vulnerabilities to unsanitized file upload.

Increase in the number of vulnerabilities in third-party components

We observed an increase of 80.6% in vulnerabilities in third-party components in 2019 compared to the previous year. These components contain plugins and packages for major products developed by third parties. Out of 2,081 vulnerabilities, 1,341 (64%) were in WordPress plugins, 354 (17%) in Jenkins plugins, while 88 new vulnerabilities were in NodeJS packages and the rest split among different products and frameworks.

An unexpected decrease in IoT vulnerabilities

Diving into categories we found that DoS was the most common vulnerability for IoT in 2019 with 418 vulnerabilities. The runner up was Remote Code/Command Execution with 398 vulnerabilities, and Broken Authentication (default credentials) was in third place with 157 new vulnerabilities in 2019. From here we can conclude that manufacturers had learned from old mistakes and paid more attention to IoT security.

API (Application Programming Interface) vulnerabilities are becoming more widespread as time goes by. In accordance with this, as presented in Figure 5, the number of new API vulnerabilities in 2019 (485) increased by 18.9% from 2018. Although API vulnerabilities continued to grow year-over-year, they appear to be slowing – from ~80% yearly growth between 2016 to 2018. One possible explanation is that, since APIs are more popular nowadays, they draw more attention from hackers and security researchers. In turn, organizations spend more time securing their APIs.

The most popular content management system is WordPress which, according to market share statistics cited by BuiltWith, is used by over 33% of all websites, and by 68% of all websites using a known content management system, followed by Drupal and Joomla. Perhaps unsurprisingly, WordPress also registered the highest number of vulnerabilities (1,574) last year and also saw a major increase of 143% from 2018 (Figure 6). The second major increase in the number of vulnerabilities (77%) was in Magento, from 126 in 2018 to 223 in 2019.

According to the WordPress official site, the current number of plugins is 55,173, a slight decrease from 55,271 in 2018. Despite this slower growth in new plugins, the number of WordPress vulnerabilities increased. The explanation for this could either be the code quality of the plugins, or the fact that WordPress is such a popular CMS, motivating more attackers to develop dedicated attack tools and try their luck searching for holes in the code.

Unsurprisingly, 97.2% of WordPress vulnerabilities were related to plugins (see Figure 7), which extend the functionality and features of a website or a blog. Anyone can create a plugin and publish it — WordPress is open-source, easy to manage, and there is no enforcement or proper process that mandates minimum security standards (e.g. code analysis). Hence, WordPress plugins are especially prone to vulnerabilities.

The three most popular databases, with only small gaps between them, were Oracle, MySQL, and Microsoft SQL Server. But, in terms of new vulnerabilities discovered in the last year, MySQL was ahead of all others, with 130 (59%) of the vulnerabilities – this represented an increase of 23.8% on 2018 and 68.8% on 2017. The runner up with regard to the number of new vulnerabilities was SQLite, with 17, followed by Oracle with 16. The popularity of SQLite is growing as it is a lightweight database that’s integrated into Android, iOS and Windows 10 as well as being used in many well-known applications like Chrome and Firefox. The most common vulnerability in Databases was Denial-of-Service (DoS) with 138 vulnerabilities, and the runner up was Broken Access Control with 45. This is due to the fact that, in the case of databases, the attacker’s desire is to get access to data. That said, vulnerabilities such as XXE, XSS or CSRF aren’t just applicable to databases.

Analyzing tweets from twitter.com, we located the top viral vulnerabilities from 2019. The first place with a wide margin – ~4.5K posts and ~77.5K retweets – belonged to (CVE-2019-0708), a remote code execution vulnerability in Remote Desktop Services for Windows (a.k.a BlueKeep). That was disclosed on May 16 and had a public exploit from September 6. According to StatCounter Global Stats reports from December 2019, Windows is the most popular desktop computer operating system with more than 77% market share, which might explain the hype around this vulnerability.

The runner up, with 670 posts and 18.7K retweets, was (CVE-2019-14287) – a bypass of `runas` user restrictions in UNIX sudo shell command. By exploiting this vulnerability, users with low privileges can run processes as a root user. The third place, with 339 posts and ~15K retweets, belonged to (CVE-2019-11932), a remote code execution in WhatsApp Messenger for Android in which the android-gif-drawable library is used to parse a specially crafted GIF image. According to Statista, WhatsApp appears to be a market leader in its sector with 1.6 billion active users.

The most viral vulnerability in web application technologies, with 553 unique posts and ~8.5K retweets, was (CVE-2019-11043), a remote code execution vulnerability in PHP-FPM running on the Nginx server. It wasn’t surprising that the RCE vulnerability in the most popular server-side technology would be highlighted accordingly in social media. Between the exploit’s release on October 22 and the end of the year, we observed more than 730,000 attempted attacks on Imperva’s Cloud WAF customers. 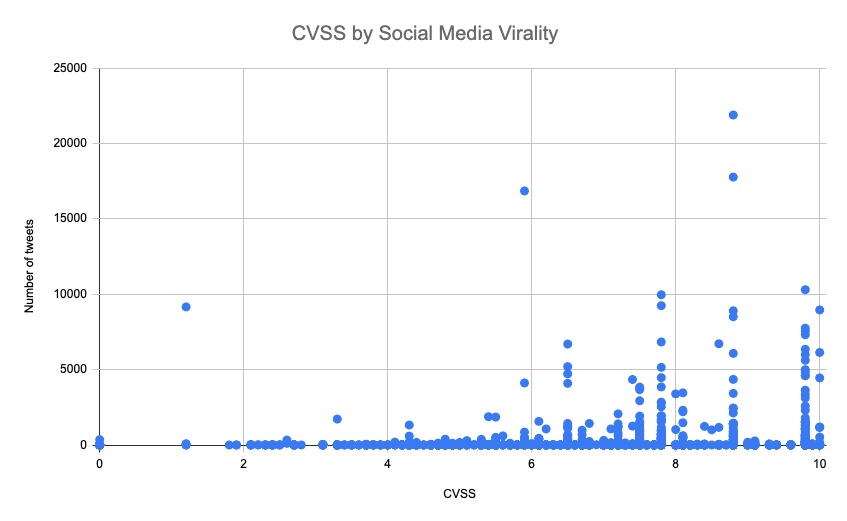 As a security vendor, we’re often asked for our thoughts on what the future might hold. Here, then, are our vulnerability predictions for 2020:

How to protect your apps and data

One of the best solutions for protecting against web application and database vulnerabilities is to deploy a Web Application Firewall (WAF) and Data Monitoring & Protection. The solutions may be either on-premise, in the cloud, or a combination of both depending on your needs, infrastructure, and more. As organizations move more of their apps and data to the cloud, it’s important to think through your security requirements. A solution supported by a dedicated security team is one to add to your selection criteria. Security teams can push timely security updates in order to properly defend your assets.