In today’s global information economy an ever-increasing amount of sensitive data is collected, used, exchanged, analyzed, and retained. And with that comes an ever-increasing number of accidental or intentional data breaches. Identifying inappropriate access to data is paramount in stopping a breach.
User behavior analytics (UBA) solutions are often used to detect insider threats and targeted attacks by analyzing behavior to find anomalies that indicate a potential threat. While viable in many circumstances, traditional UBA solutions can miss the mark when it comes to understanding the complexity of data access to identify not only insider threats from compromised users, but also those stemming from careless and malicious ones.
Drew Schuil, Vice President of Global Product Strategy, is back again for Whiteboard Wednesday. This time he’s talking about different approaches to UBA, the challenges of using traditional UBA solutions to detect and protect against inappropriate access to sensitive data, and a recommended best practice architecture we’ve seen work with customers around the world. Watch to learn more. 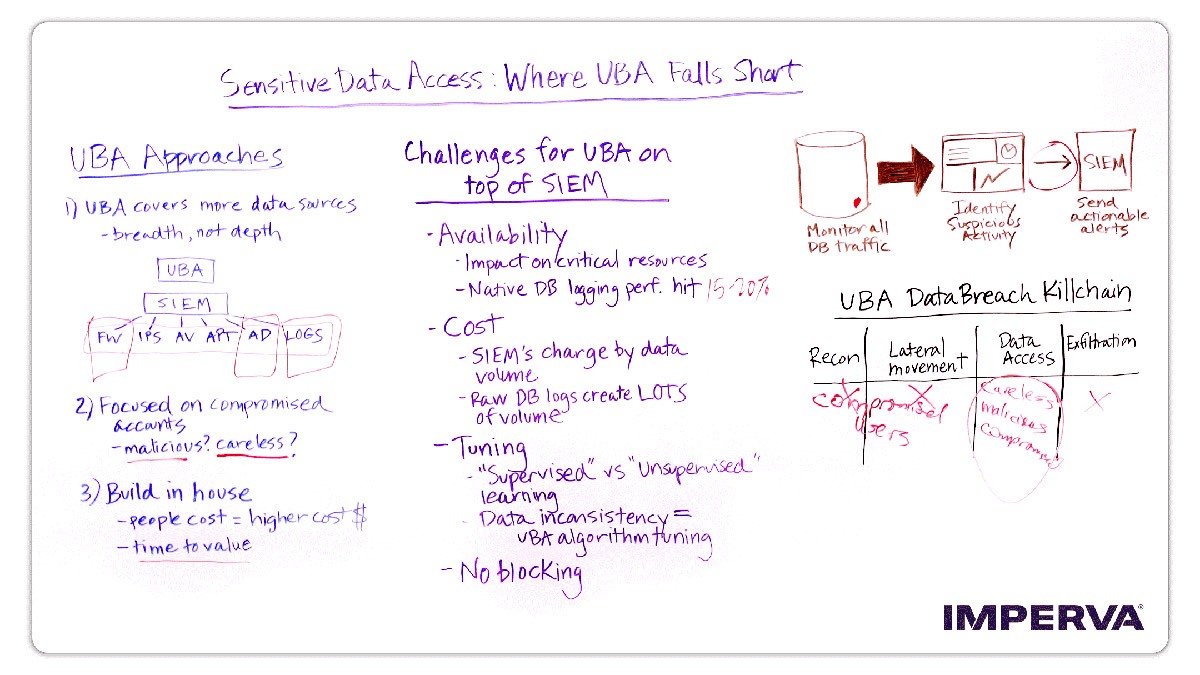 Common Approaches (and Challenges) to UBA

I’m going to start with UBA approaches. I think it helps to frame the conversation a little bit.

The end result is to apply machine learning to the data that we monitor from the database and send that to the SIEM, instead of sending thousands and thousands, or millions, of logs…so now we’re talking about maybe five or six actionable alerts per week. We’re seeing this in very, very large environments, so that when the SOC team looks at this, and tries to make sense of it, and maybe write some additional correlation rules, they can do it in a more effective manner.

Let’s talk about a couple of the other approaches that I hear. We’ll skip to number three, build in-house. Build versus buy, right? I’ve heard from some organizations that have data scientists on staff, or would like to bring them on staff and do some of this in-house. The main issue with this approach is pretty obvious—it’s time-to-value. Buying an off-the-shelf solution that’s already been through and been tested in other enterprises is going to save you a lot of time, especially if you’ve got tons of other priorities and other projects on your plate. While I do see this come up quite a bit with organizations that have a lot of people, that have a lot of expertise within the data scientist world, it’s really not practical for organizations that need to move quickly to protect their sensitive data.

Let’s come back to number two, talking about compromised accounts. I hear a lot from organizations that are focused on compromised accounts and they’re implementing a variety of different types of solutions, whether it be an APT-type solution, or advanced antivirus, a next-generation antivirus. At the end of the day, the problem with this is it misses two key categories of users that have access to sensitive data, and that’s malicious and careless [users].
Security Gap – Careless and Malicious Users
If you look at careless users, these are careless or negligent, privileged accounts, or users that have access to things like databases. They’re borrowing service accounts. They’re going around the normal change control in order to do their job, which can lead to risks and weaknesses within the organization. To uncover careless behavior you really have to have a deep understanding of, for example, database logs. If you’re trying to go too far and too thin, [careless user activity] is one of the categories that you’re not going to understand because it doesn’t show up as something that’s an attack. It’s something that’s careless, that needs to be addressed as part of good security hygiene.
The last category, malicious, is probably the hardest because [malicious] users know where all the traps are. They know how to get around them. It’s very difficult when you’ve got an advanced, malicious user in order to be able to detect those. That requires this deep knowledge, being able to go past the inch deep and mile wide, to really have a deep understanding of the problem that you’re trying to solve.

If you look at the types of user profiles I just talked about, most of the security industry is focused here on recon and lateral movement. For example, they’re focused on monitoring, let’s say, log in and log out to active directory, and then what happens after that, so lateral movement within the organization.
I see this very commonly with UBA discussions. They’re focused on lateral movement. The problem is for careless and compromised users, they’re not going to be detected in either of these stages because they’re already legitimate users on the network. They don’t need to do reconnaissance. They’re not going to use account takeover or account [credential] borrowing, necessarily, to demonstrate or trigger an alert around lateral movement. We really need to have a deep understanding of data access in order to address these two other user categories of careless and malicious, which, by-the-way, will help us also address compromised users.

If you’re focused here on exfiltration, again, the horse has already left the barn. It’s leaving the yard. Most exfiltration type approaches with UBA are focused on data that’s going out of the firewall, and are looking at flows, and not necessarily the context of the actual data itself. If they’re taking a hundred rows out of the database per day, it’s very low volume. It’s not going to trigger something that’s looking for exfiltration at the firewall, for example.

Argument here is that if you’re focused on sensitive data protection and using UBA to solve this problem, you really need to focus on the data access layer. You need to focus on protecting the data where it lives, having a deep understanding of how users interact with the databases, the file systems, cloud repositories, big data, these other places where you’ve got huge data repositories. You really need to have a deep understanding of data.
If you’re looking to say, “Well, which UBA should I invest with first?”, because chances are you’re going to have to have a layered approach and multiple solutions, our argument is you need to start with data access. Because you can address all three use cases here, whereas you’re not going to be able to address careless and malicious users if you’re only focused on compromised accounts.
I hope this session was useful. Please join us for another on Whiteboard Wednesdays.

Data Security
How to Monitor Athena Usage to Understand Your Operations, and Control Security and Costs