Scott Helme, an information security consultant, developed report-uri to provide violation reporting for sites that deploy a content security policy or HTTP public key pinning. He noticed that the browser will enforce security policies configured by the site and block malicious content, such as a cross-site scripting attack. However, the host wouldn’t know about the activity and as a result couldn’t resolve the problem. Using his reporting tool report-uri, the browser can send a violation report and you can monitor what security policies are being triggered, where and why.

The Challenge of Success — Analyzing Massive Volumes of Traffic

The rapid growth in the number of reports handled by the site required additional support, and Imperva sponsored a free CDN account for report-url.io. As Scott has written, the site was receiving peaks of 2,000 reports per second, resulting in an ingress data rate of about 75 Mbps and egress data rate of about 20 Mbps. In May the traffic spiked to an even higher rate, with over 3 billion reports in that month. Imperva handled that volume of traffic and the site continued serving all the report requests.

Dropping Bad Traffic at the Edge

Imperva rules are applied to block traffic based on the following criteria:

With this large amount of traffic blocked at the CDN edge servers, the resources of the site servers are available to perform the service to which they should be dedicated, which is processing reports. This results in improved performance and a direct cost savings a less server resources are required. Following is a live traffic view from the Imperva dashboard that clearly shows the traffic origins, and the amount of traffic that is passed to origin and the amount blocked. 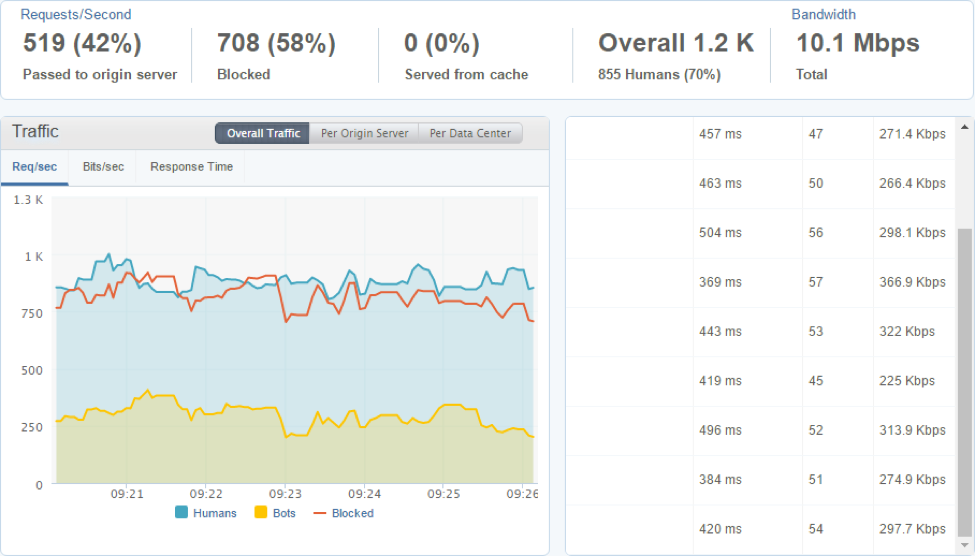 The Imperva Cloud Application Security service protects the site from malicious traffic, so that Scott does not have to worry about attacks on the site. In the first weeks using the service, he has seen examples of all the OWASP top ten blocked by Imperva.

Imperva Cloud Application Security service also provides load balancing among the available pool of servers, obviating the need for Scott to provide, configure and maintain his own servers for this purpose. Looking to the future where the site will have servers in more than one region, Scott anticipates applying Imperva load balancing.

The Imperva network provides other features for the site.

Note that Imperva Application Delivery provides caching of server content in servers closer to your site, for quicker page loading. However, in this site each report is unique and has to be passed to the origin, therefore having limited benefit from the cache.

As we’ve seen, Imperva has provided many benefits for the site, improving performance, utilization and security. Scott anticipates incorporating additional Imperva features the site could utilize. We look forward to hearing about his progress.