Imperva Incapsula’s latest Global DDoS Threat Landscape Report is an analysis of more than 17,000 network and application layer DDoS attacks mitigated by our services during Q1 2017.

The largest application layer attack we mitigated this quarter peaked at over 176,000 RPS—already higher than the largest attack we saw in 2016, which peaked at approximately 173,000 RPS.

On a macro level we saw DDoS attacks continue to evolve in terms of complexity and persistence, while also growing shorter in duration.

In Q1 2017 we witnessed yet another decrease in average attack duration, attesting to the prevalence of botnet-for-hire services (a.k.a. booters or stressers). that enable their users to launch short, low-volume bursts. Such attack tools are commonly used by non-professional offenders, often internet trolls who use DDoS to settle a personal dispute or to simply harass their victims.

At the same time, we continued to observe a higher level of sophistication in DDoS offenders, reflected by a steep rise in multi-vector attacks. In Q1 2017 these accounted for more than 40 percent of all network layer assaults, up from 29 percent in Q4. 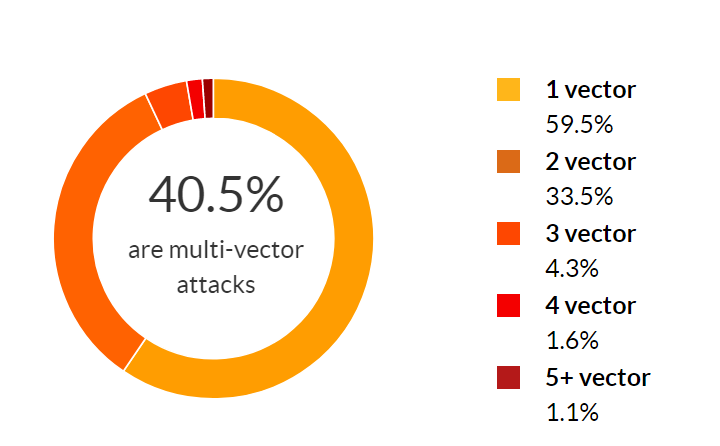 In the first quarter of the year we saw attacks grow more persistent. Specifically, 74 percent of targets suffered repeat attacks during the quarter, with 19 percent being attacked 10 times or more—in both cases these numbers were the highest ever on record. In the most extreme case, an established US-based science news website was hit 1,046 times by low-volume bursts lasting 10 minutes or less.

Consistent with previous quarters, the United States, United Kingdom and Japan continued to top the list of most targeted countries. For the first time in the past year, they were joined by Singapore and Israel.