By now many of you have heard that on September 20, 2016, the website of renowned security journalist Brian Krebs was hit with one of the largest distributed denial of service attacks (DDoS) to date.

The magnitude of that attack, the star status of its target within the InfoSec community and the heaps of drama that followed made this one of the most high-profile DDoS stories of the year.

On September 30, the story saw another development when a HackForum user by the name of ‘Anna-senpai’ leaked the source code for Mirai—the botnet malware behind the attacks. It was speculated that in doing so the perpetrator was trying to hide his tracks, rightfully concerned about the repercussions of taking a swing at Brian.

Since the source code was published, the Imperva Incapsula security team has been digging deep to see what surprises Mirai may hold. In this post we’ll share:

New Mirai scanner released: We developed a scanner that can check whether one or more devices on your network is infected by or vulnerable to Mirai. You can find the beta of the Mirai Scanner here.

If you missed out “Deep Dive into the Mirai Botnet” hosted by Ben Herzberg check out our video recording of the event.

Close Encounters of the Third Kind

A thorough review of Mirai’s source code allowed us to create a strong signature with which we could identify Mirai’s activity on our network. We then turned to our logs and examined recent assaults to see if any of them carried Mirai’s fingerprints.

Sure enough, we found the Mirai botnet was responsible for a slew of GRE floods that were mitigated by our service on August 17. Using a hit-and-run tactic, the attack peaked at 280 Gbps and 130 Mpps, both indicating a very powerful botnet. 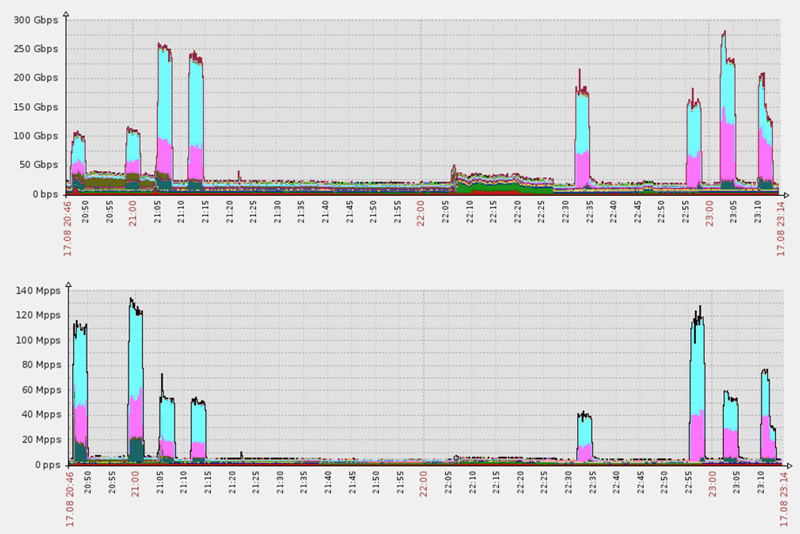 Overall, IP addresses of Mirai-infected devices were spotted in 164 countries. As evidenced by the map below, the botnet IPs are highly dispersed, appearing even in such remote locations as Montenegro, Tajikistan and Somalia.

Interestingly, since the source code was made public, we’ve also seen a few new Mirai-powered assaults. This time they took the form of low-volume application layer HTTP floods, one of which was even directed against our domain (www.incapsula.com).

Characterized by relative low requests per second (RPS) counts and small numbers of source IPs, these looked like the experimental first steps of new Mirai users who were testing the water after the malware became widely available. Likely, these are signs of things to come and we expect to deal with Mirai-powered attacks in the near future.

Mirai is a piece of malware that infects IoT devices and is used as a launch platform for DDoS attacks. Mirai’s C&C (command and control) code is coded in Go, while its bots are coded in C.

Like most malware in this category, Mirai is built for two core purposes:

To fulfill its recruitment function, Mirai performs wide-ranging scans of IP addresses. The purpose of these scans is to locate under-secured IoT devices that could be remotely accessed via easily guessable login credentials—usually factory default usernames and passwords (e.g., admin/admin).

Mirai uses a brute force technique for guessing passwords a.k.a. dictionary attacks based on the following list:

Mira also seems to possess some bypass capabilities, which allow it to circumvent security solutions:

While this may seem like a standard source code, Mirai also has a few quirks that we found especially intriguing…

One of the most interesting things revealed by the code was a hardcoded list of IPs Mirai bots are programmed to avoid when performing their IP scans.

This list, which you can find below, includes the US Postal Service, the Department of Defense, the Internet Assigned Numbers Authority (IANA) and IP ranges belonging to Hewlett-Packard and General Electric.

This list is interesting, as it offers a glimpse into the psyche of the code’s authors. On the one hand, it exposes concerns of drawing attention to their activities. A concern we find ironic, considering that this malware was eventually used in one of the most high-profile attacks to date.

On the other hand, the content list is fairly naïve—the sort of thing you would expect from someone who learned about cyber security from the popular media (or maybe from this Wiki page), not a professional cyber criminal.

Together these paint a picture of a skilled, yet not particularly experienced, coder who might be a bit over his head. That is unless some IP ranges were cleared off the code before it was released.

Another interesting thing about Mirai is its “territorial” nature. The malware holds several killer scripts meant to eradicate other worms and Trojans, as well as prohibiting remote connection attempts of the hijacked device.

For example, the following scripts close all processes that use SSH, Telnet and HTTP ports:

These locate/eradicate other botnet processes from memory, a technique known as memory scraping:

And this function searches and destroys the Anime malware—a “competing” piece of software, which is also used to compromise IoT devices:

The purpose of this aggressive behavior is to:

These offensive and defensive measures shine a light on the turf wars being waged by botnet herders—a step away from the multi-tenant botnets we previously encountered in our research. So much for honor among thieves.

From Russia with Love?

Lastly, it’s worth noting that Mirai code holds traces of Russian-language strings despite its English C&C interface. Here, for instance, Russian is used to describe the “username” and “password” login fields:

This opens the door for speculation about the code’s origin, serving as a clue that Mirai was developed by Russian hackers or—at least—a group of hackers, some of whom were of Russian origin.

Other bits of code, which contain Rick Rolls’ jokes next to Russian strings saying “я люблю куриные наггетсы” which translates to “I love chicken nuggets” provide yet more evidence of the Russian heritage of the code authors, as well as their age demographic.

What Can You Do to Prevent IoT Botnet from Spreading

While DDoS attacks from Mirai botnets can be mitigated, there’s no way to avoid being targeted. However, as a device owner, there are things you can do to make the digital space safer for your fellow Internet citizens:

With over a quarter billion CCTV cameras around the world alone, as well as the continued growth of other IoT devices, basic security practices like these should become the new norm. Make no mistake; Mirai is neither the first nor the last malware to take advantage of lackluster security practices.