Whenever Personally Identifiable Information (PII) is involved, it is wise to encrypt it from the get go. Strong encryption coupled with need-to-know access is key to gaining the trust of your customers and protecting their privacy. And it’s often required by ever-evolving data privacy laws and regulations such as GDPR.

This post is a detailed account of how we built privacy into Account Takeover Protection, including technical solutions to the challenges of encryption across operating systems, services, JDK versions, export limitations, and programming languages. In today’s ecosystem, many teams have similar needs. If you’re in such a team, whether in the security space or not, you may find this post helpful. We learned a lot of new things about encryption, and so will you.

Our requirements were as follows:

The source originates the PII, and the sink is an API service which returns the PII to the user via a web UI. Additional services might read the PII. Imagine, for example, an auxiliary service which simply counts unique usernames.

In our case, the data source is based on the V8 JavaScript engine, and the data sink is in Java, based on Oracle JDK 8. During development, our microservices need to run on Linux and MacOS, both with OracleJDK and OpenJDK. This becomes important later.

We started simple – the classic solution for requirements (1) and (2) is for the data source to encrypt the PII using a public key and for the user/browser to hold the private key.

We thought the user could hold on to a PEM file containing the private key in the same way AWS EC2 works. However, customers said they prefer passwords to key files, since they already have flows to deal with passwords.

It’s possible to encode the private key in base64 and use the result as a very long password, but requirement (3) meant that we should be able to replace the password without replacing the private key.

Eventually, our approach was to encrypt the private key using a symmetric key generated from a user-supplied password 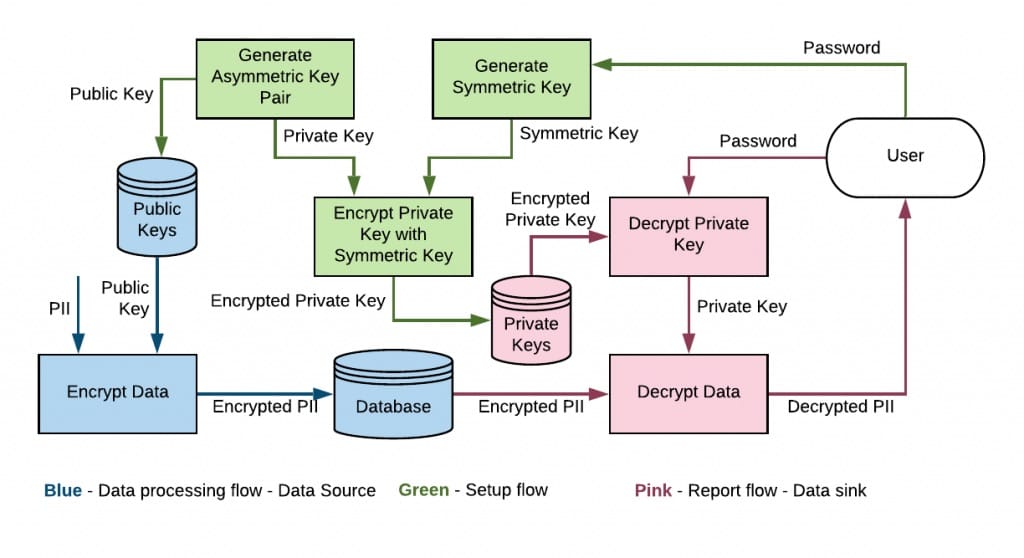 Because neither the unencrypted private key nor the password are ever persisted, a DB leak would not compromise the encrypted data.

So, in order to access unencrypted PII, an insider would have to eavesdrop traffic on production nodes before they even get to our data source. That’s requirement (5), which is outside the scope of this post, but there are generally other compliance controls in place to mitigate this threat.

To address requirements (4) and (6), the data source also sends a hash of the usernames, plus a version of the encryption algorithm, with 0 being “only hashed username are available”.

Our go-to asymmetric encryption is RSA:

This cipher must be able to decrypt what our JavaScript data source encrypts. Our data source uses crypto-browserify

That turned out to be more challenging than anticipated. Let’s take a deeper dive.

Sending the Public Key to the Data Source

The simplest way to generate the asymmetric key was:

But now we need to send the key to the Data Source. publicEncrypt() expected a PEM file, but what does our publicKey look like? It turns out that, on our JDKs, it’s always an X.509 key in DER format, although this isn’t guaranteed or documented anywhere.

So we needed to convert DER to PEM, which is not a functionality built into the JDK, but we didn’t want a whole new library for this. However, PEM is just base64 encoded DER with a header and a footer (example), so we encode the DER bytes with base64 and send that to the data source, which does:

If you watched carefully, you noticed that publicEncrypt() is pretty simplistic. It refused to work with our Java cipher, which failed with padding errors. We tried:

After some quality Stack Overflow time, It became apparent that publicEncrypt() uses certain parameters and that the cipher has to be initialized with exactly those parameters:

The former, and other, similar variants worked on Oracle JDK but not on OpenJDK.
The latter uses Bouncy Castle (“BC” security provider), but Bouncy Castle refused to parse this transformation specification.

What did work across JDKs was:

Note that the default Java provider may be sensitive to the version of OpenSSL installed on the machine, if any.

Now it’s time to encrypt the private key. We started our symmetric transformation with Blowfish:

With those, we were using the password as the key. That, however, stopped working with some input lengths, because what we actually needed was to generate a constant-length key from the password.

This one also uses Bouncy Castle, because we don’t want to depend on differences between Oracle JDK and OpenJDK:

This algorithm worked on OpenJDK, but Oracle JDK failed with “Illegal key size” errors. After a lot of digging, experimenting, blood, sweat, and tears, we discovered that Oracle JDK abides by a legal policy that forbids 256-bit AES. Even tinkering with the relevant JAR files didn’t help.

Dropping to 128-bit AES did the trick:

We’ve built a Java library expressly designed to accommodate our requirements, with an additional requirement:

The Java object which represents an unencrypted private key, or a reference for this object, may not be leaked outside the library. In this way, no developer can persist the private key, even by mistake.

As security professionals, we know the pain of having to type passwords all the time. We didn’t want to impose that on our users.

Privacy by design in a mixed environment proved to be more challenging than expected, but being able to safely provide this value to our customers was totally worth it. If you need to build something similar, hopefully this post will help you walk through the challenge.