Since the publication of these disclosures, details have emerged regarding the observed source of the exploitation of these vulnerabilities. The attacks are being widely attributed to the state-sponsored group dubbed Hafnium, alleged to be operating out of China.

The most notable of the new CVEs, CVE-2021-26855, is a SSRF vulnerability in Microsoft Exchange which allows an attacker to induce the server into performing “unintended actions” through the use of a series of specially crafted POST requests. The attacker can leverage this vulnerability to exploit the other CVEs to perform malicious actions, such as dump private email, or even achieve remote code execution.

Imperva has put dedicated security rules in place to protect our customers in a direct response to the initial disclosures. Imperva has also performed analysis on the attempted exploitation of these CVEs and we have produced the following insights.

Since the 2 March disclosures, Imperva has observed over 44k scanning and exploitation attempt sessions in the wild from over 1,600 unique source IPs, related to the Microsoft Exchange CVE-2021-26855 SSRF. From this data, we have been able to identify the most targeted industries and countries which have been affected by the vulnerability in the aftermath of the disclosures.

One of the key observations we have made is that this vulnerability has impacted almost every category of industry, this observation is explained by how ubiquitous the use of Microsoft Exchange is across all sectors. According to our data, the Computing & IT sector was the most targeted industry, with 21% of all targeted sites belonging to this category. Next was Financial Services with 18%, and Telecoms and ISPs completed the top 3 with 10.5%. Below we show the breakdown of scanning and exploitation attempts against various industries. 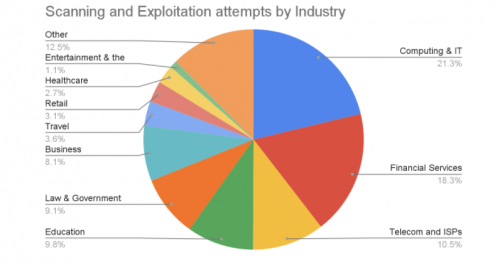 Imperva observed both scanning and exploitation attempts against sites worldwide, with the US being the most targeted country, with the UK and Singapore a distant second and third, respectively. 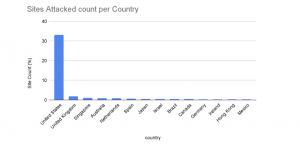 Imperva observed that since the disclosures, relatively few scanning and exploitation attempts have been made from Chinese sources. This could be because exploitation, and to a greater extent, scanning has shifted to the wider public. It may also be because the attackers are using proxies to carry out the attacks. The chart below shows the top attacking countries by session count observed by Imperva analysts since the disclosures.

Imperva analysts have observed various indicators of the attempted exploitation of the Microsoft Exchange Hafnium CVE-2021-26855 in the wild, indicating various motives on the part of the attackers. As mentioned previously, an attacker can leverage the vulnerability to perform various unauthorized actions, including the collection of private information, and even the writing of arbitrary files to the server resulting in remote code execution. In this section, we will discuss some of the requests we have observed and the perceived intentions and motivation of the attackers.

Detailed descriptions of how the exploit chain works, and how it can be exploited are available at various different sources [1][2], however the important thing to understand is that the vulnerability allows an attacker to send malicious requests to various backend components in Microsoft Exchange by means of a specially crafted POST request to either the Outlook Web Application or the Exchange Admin Centre, where the “X-BEResource” and “X-AnonResource-Backend” cookie values can be manipulated to specify the targeted resource. In our investigation following the disclosures we have observed the following in our data.

A common exploit request observed by Imperva attempting to exploit the CVE-2021-26855 SSRF vulnerability was a POST request to Exchange Admin Centre (/ecp/) and Outlook Web Application endpoints (/owa/) endpoint, with the crafted cookie value endpoints set to the Exchange Web Services endpoint “/EWS/Exchange.asmx”. This allows the attacker to gain authenticated access to private mail on the server. This request accounted for 18% of exploitation attempts observed. 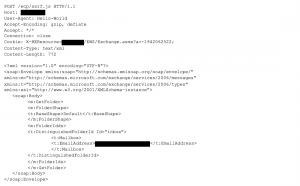 The most common exploitation attempt of the SSRF observed by Imperva analysts were requests to the Exchange Admin Centre endpoint (/ecp), with the vulnerabile cookie set with the FQDN of the server, and the endpoint of /autodiscover/autodiscover.xml.

Autodiscover in Exchange is a service which allows for the rapid collection of Exchange configurations, service URLs and supported protocols, therefore it makes an obvious target for attackers who are attempting to quickly gather information, escalate privileges and maintain persistence. In the case of this vulnerability the autodiscover service could be used to gather the information required for further exploitation of the other CVEs associated with the chain. This request accounted for 51% of exploitation attempts observed.

Another pattern Imperva analysts observed were crafted POST requests to the Exchange Admin Centre (/ecp), with the cookie value crafted with the /mapi/emsmdb endpoint.

Research into the published exploits and disclosures indicate that the “/mapi/emsmdb” endpoint can be abused to procure a valid SID, which can then allow the attacker to gain privileges to the Exchange “proxyLogin.ecp” endpoint (Exchange HTTP proxy), which can in turn be used to obtain a valid “ASP.NET_SessionID” and “msExchEcpCanary” values which are required for further chained exploitation of MS exchange. This request accounted for 3% of exploitation attempts observed.

How Imperva protects you

Check if you have been compromised

Since the disclosures of these zero day vulnerabilities, various news articles have been published reporting mass exploitation [1][2]. We recommend that if you have unpatched exchange servers in your organization, you apply the latest patches from Microsoft as soon as possible, and use the following guide from Microsoft to check for any indicators of compromise.