The disclosed command injection vulnerability affects the Snyk command-line interface tool that helps developers find and fix vulnerabilities. Exploitation of CVE-2022-40764 allows attackers to execute arbitrary commands on the host system where the Snyk CLI is installed. This can be exploited to gain access to sensitive data, modify files, or install malicious software.

We’d like to note Snyk’s responsible response and cooperation on this matter. Snyk released a patch for the vulnerability and recommends that users update to the latest version of Snyk CLI.

In this post, we explain the method we used to discover the vulnerability and different exploit scenarios.

Traditionally, monkey patching is used to alter the behavior of a program at runtime. This technique can be used to add or modify a program functionality without changing the program code.

We used monkey patching to log information about function calls, parameters, and return values in order to locate potential vulnerabilities.

You can view the monkey patching script we used in our Github repository: monkeyp.

When using dynamic analysis techniques to hunt for vulnerabilities, supplying the right input is crucial. We started by broadly defining the input range of our target. In Snyk’s case, it was a variety of programming languages and package managers. These projects were easily gathered using the Github API.

We monkey patched the Snyk CLI so it logged sensitive NodeJS operations such as file system access and shell/program execution. We then wrote a script that used our patched Snyk CLI to scan each of the projects we collected.

After a few minutes, we had all the execution logs. We started looking into them when we noticed that the “child_process.spawn” method was called with what seems to be a “user-supplied” input and the shell option set to true. The “shell” option is a boolean option that, when set to true, runs commands inside of a shell (i.e. uses ‘/bin/sh’ on Unix, and process.env.ComSpec on Windows). Thus, if we could control any part of the input, we would be able to execute arbitrary shell commands.

After further investigation, we landed on the “vendor.json” file, which is used to specify the packages used by go projects. The “ignore” property value seemed to be the one used in the spawn command.

We tried modifying it to write a file to the /tmp directory like so:

However, it did not work. The Snyk CLI output the following error:

Judging by the first line, we saw that some of our input was interpreted as a shell command. Looking at monkeyp logs, we could clearly see the issue.

The Snyk CLI modifies our “ignore” value. Below, you can see the relevant code from the “snyk-go-parser” package which is responsible for these modifications. 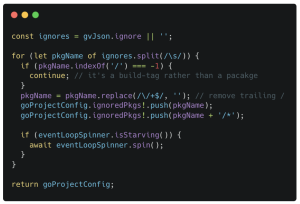 The “ignore” value is divided into chunks based on the space character. Then, for each chunk the following logic is performed:

The “ignorePkgs” array is later converted to a string in the “snyk-go-plugin” package by calling the join method with the separator argument set to a comma, which is later passed to the “child_process.spawn” method as one of the arguments.

Putting this all together, it means we either execute a file or we need to find a way to execute shell commands without using spaces.

When our command was interpreted by bash or zsh, we could use IFS (Input Field Separator), which is a common WAF bypass technique. IFS is a special shell variable, where each character is treated like a delimiter. If IFS is unset, the default value will be , which was ideal for our objective.

Finally, we had to include at least one forward slash to ensure our input was added to the “ignorePkgs” array.

You can see the final payload below; it simply opens the calculator app on macOS.

To successfully exploit this vulnerability, a target would have to execute the “snyk test” command on untrusted files. While this is bad, practical exploitation is hard. We decided to go back and look for libraries that use Snyk CLI as a dependency to see if there would be a way to make exploitation more practical.

After going over a few libraries, we found that Snyk built a VSCode extension that uses the CLI to automatically scan every project opened with VSCode. This is already an improvement as the user would only need to view untrusted files in the VSCode editor to trigger our exploit, which is more likely in our view.

The Imperva Red Team mission is to make attackers’ jobs harder by finding and responsibly disclosing vulnerabilities in popular services. It was a privilege to contribute to protecting the privacy of Snyk’s user community, as we continuously do for our own Imperva customers.

We hope you found this post informative and we look forward to sharing more technical walkthroughs in the future.