WP Financial Services: Web Application Attacks Grow by 38% In First Half of 2021 | Imperva

Home > Blog > Financial Services: Web Application Attacks Grow by 38% In First Half of 2021

Financial Services: Web Application Attacks Grow by 38% In First Half of 2021

During his career in the middle of the last century, professional bank robber Willie Sutton made off with an estimated $2 million in stolen money. Urban legend has it that when a journalist asked Sutton why he robbed banks, he replied, “That’s where the money is.” In later interviews, Sutton disclaimed the quote. Regardless, the point is well-made and applies to the financial services sector to this day.

While an old-fashioned bank robbery can never be ruled out, straight-up stealing money from a brick and mortar bank is very much a “last-century” approach. Today, the currency that the cybercriminals are after is personal data, and the attack surfaces are the web applications that customers, partners, and employees use to conduct a wide range of online financial transactions.

Make no mistake: financial institutions are still “where the money is.” Financial services hold the dubious title “most-breached sector”, accounting for 35% of all data breaches. To the delight of cybercriminals, the COVID-19 pandemic has driven large-scale growth in online banking, dramatically increasing the volume of sensitive customer data that’s available to steal. At Imperva, our research demonstrates how these realities are changing the threat landscape for the financial services sector. As the COVID-19 pandemic dragged into 2021, Imperva Research Labs reported that between January and May 2021, web application attacks on the financial services sector increased 38%. 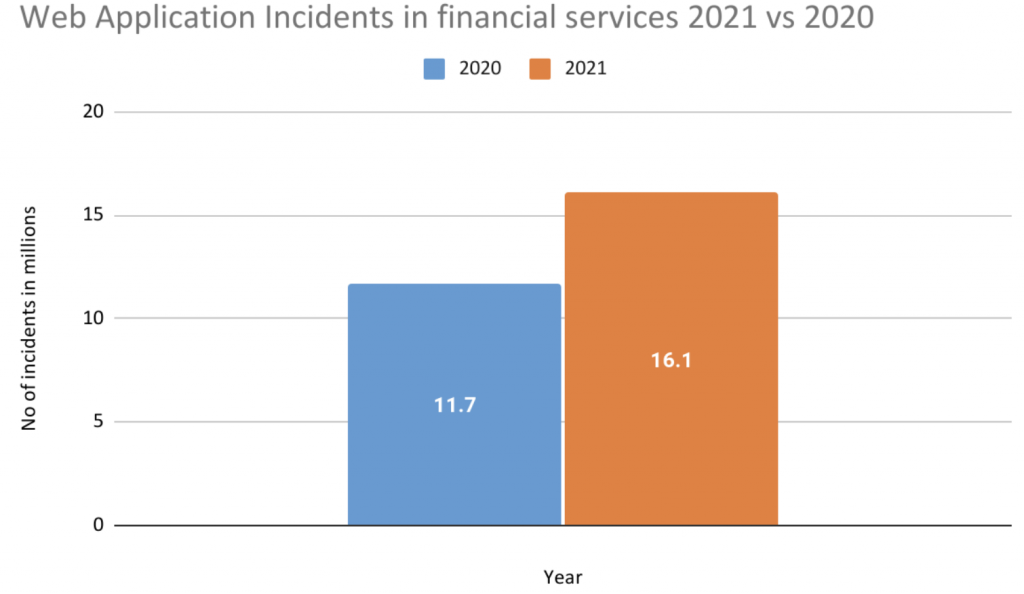 The surge in online banking and wider digitalization within the financial services sector has resulted in most organizations needing to manage dramatically higher volumes and greater complexity of data. This, along with the prospect of stricter data privacy laws on the horizon, is making sensitive data protection an unprecedented challenge.

The speed of change in this industry imperils security controls being applied to all data stores, which exposes many financial services organizations to increased risk and vulnerability to a data breach. Cybercriminals know this. Attacks on sensitive data are escalating at an alarming rate. Imperva Research Labs reported that more than 870 million records had been compromised in January 2021 alone. This is more than the total number of compromised records in all of 2017.

Layer 7, or application layer, DDoS attacks target the top layer or the application layer of the OSI model which helps facilitate connections over internet protocol. The goal is to overwhelm server resources by flooding a server with so much traffic in the form of requests to connect until it is no longer capable of responding. The higher the number of requests per second (RPS) the more intense the attack. Digital Banking Report found that “improving the customer experience in banking” should be the first goal for financial service providers. Those that invest in mitigating attacks that degrade the customer experience have higher rates of recommendation, greater wallet share, and are more likely to up-sell or cross-sell products and services to existing customers. On the other hand, when customers are denied access to their online banking services the reaction is one of indignation; often resulting in them complaining on social media platforms, switching to a different provider, and damaging the bank’s brand. 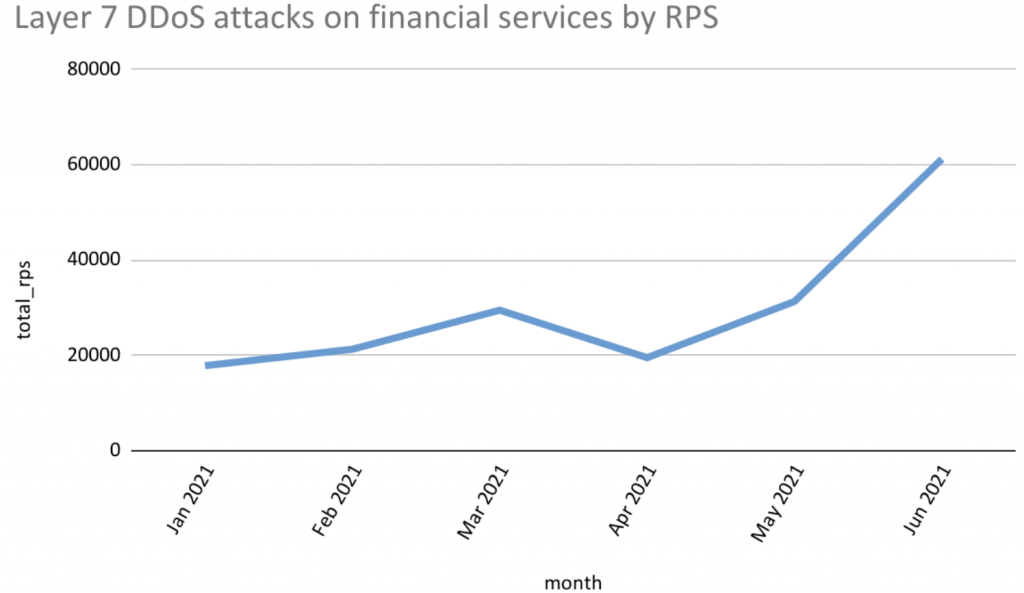 In late 2020, Imperva noted a considerable increase in the number of serious Ransom Denial of Service (RDoS) threats, targeting thousands of large commercial organizations globally including many in financial services.

RDoS campaigns are extortion-based Distributed Denial of Service (DDoS) threats motivated by financial gain. The extortionists often leverage the names of well-known threat actor groups in their extortion emails to demand payment in bitcoin currency to prevent a DDoS attack on the target’s network.

In the first six months of 2021, Imperva Research Labs noticed these threats were rising. The attack patterns this year are very similar to those in 2020 where:

1. The extortionist sends an email, sometimes accompanied by a sample attack (that often takes the company offline for a short period of time).
2. The target is given a week’s notice to get the payment in order.
3. The extortionist threatens to return with a massive attack at a scheduled time.

Client-side attacks happen when a website user downloads malicious content and enables a bad actor to exploit the website by intercepting user sessions, inserting hostile content, and conducting phishing attacks, to name a few. In financial services, these attacks focus on the skimming of payment information by exploiting third-party scripts used by thousands of websites across many industries.

Financial websites are relying more on third-party scripts to provide better services for their customers, but due to the high volume of digital transactions processing financial assets and other sensitive data, they are a rich target for client-side attacks. Once credit card details are stolen, the data may be used immediately by cybercriminals to acquire goods or sold to other criminals for later exploitation. In either case, this poses a serious risk. Consumers and their financial services providers don’t find out until it is too late.

Since 1999, the Common Vulnerabilities and Exposures (CVE) system has reported more than 150,000 CVEs – zero-day vulnerabilities – in commonly used software applications and components. Of these, more than 11,500 of them are characterized as critical-severity though it is commonly understood that the vast majority of software vulnerabilities remain unreported. The front-to-back processing for all financial services integrates a complex set of software applications that involve back office, middle office, risk management, business developers, finance, and IT. Application Programmable Interfaces (APIs) are at the core of these applications, enabling them to communicate with one another. APIs often self-document information, such as their implementation and internal structure, which can be used as intelligence to attack the software supply chain. Additional factors such as weak authentication, lack of encryption, business logic flaws and insecure endpoints make APIs even more vulnerable to attack. As financial services organizations partner with other companies to deliver and receive services, the supply chain attack surface grows and elevates the attack risk.

An under-protected supply chain makes your organization an easy target for cybercriminals who know that vulnerabilities in software applications and APIs are a way for them to infiltrate and compromise your business. As most of an organization’s software these days is not proprietary, attackers will find ways to exploit the many different types of software applications a company may be using. Since the Sunburst attack in late 2020 and others following it, one would naturally expect the priority of supply chain security to increase within organizations, but it hasn’t. This has led regulatory bodies to take aim at the issue. To support this, regulatory bodies in the financial services sector such as the Monetary Authority of Singapore and the FFIEC (Federal Financial Institutions Examinations Council) in the US, have issued new guidance addressing the need for supply chain resilience in the sector. Furthermore, in April 2021 The Cybersecurity and Infrastructure Security Agency (CISA) and the National Institute for Standards and Technology (NIST) released new guidelines on defending against various software supply chain risks.

What kind of data is being stolen?

Imperva Research Labs finds that 74% of the data stolen in the past several years is personal data. This is generally defined as information that can be used on its own or with other information to identify, contact or locate a single person, or to identify an individual in context.

The widespread theft of personal data is a strong indication that many organizations are not putting enough protection into place to secure it. In many instances, personal data theft from financial institutions is made easier because it is regularly shared between systems, people, and suppliers to complete transactions. As regulations governing data privacy become more stringent, it will be critical for every organization to have the capacity to discover, identify and classify personal data across their data estate. Only when an organization knows where personal data is hosted and what applications and users are accessing it, will it be able to extend the security controls that protect it.

What you can do to mitigate risks to your organization

The short answer is: ensure you can see the data first, then you can protect it, and all paths to it. This means protecting the organization’s websites, mobile applications, and APIs from automated attacks without affecting the flow of business-critical traffic. It must also defend against DDoS injections and account takeovers outside the network core. It also means providing your business applications with full-function defense-in-depth with web application firewalls (WAFs), bot management, and runtime and API protection. Most importantly, it means having the capacity to discover and tag sensitive personal data as well as enrich and correlate the data to provide accurate behavioral analysis for threat prevention and mitigation. This enables you to automate the extension of your security controls to all of your data – on-premises and cloud-based, current and archived – to ensure continued compliance reporting, governance, and security for all data sources.