Unless you’ve been living in a cave for the last decade, you’ve probably heard of the concept of a machine learning system at least once in your life. Whether it’s auto-translation, auto-completion, face or voice recognition, recommendation systems or autonomous driving, AI-based systems can be found in almost every aspect of our daily lives.

But, although this field looks innovative, it’s actually been around for quite some time, with roots going back to the late 1950s. In recent years the field has been re-recognized, and artificial intelligence is becoming better than human expertise in several fields.

So, what does a typical machine learning project look like?

Although there are many methodologies out there, it’s possible to say that a typical data science project will hold five main stages – the definition of the problem we wish to solve, data collecting and cleaning, training and testing a model, deploying the product, and monitoring it. 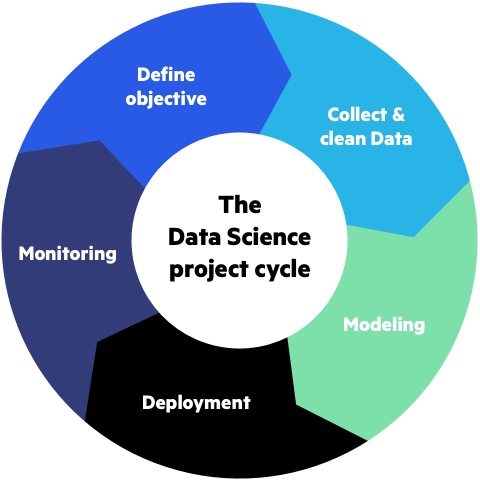 In recent years, most of the focus and open tools were around the data exploration and developing the model stages (2 & 3), and also the deployment stage (4). Is this neglect justified?

For a standard application, we should keep monitoring for errors, latency, crashes and so on. All of these are valid, of course, in the case of an artificial intelligence system, but they’re not the main issue. The most important thing to look for is that our system keeps doing what it was built for and doing it well.

The difference from a regular system is that the output depends significantly on the input, and its nature may change over time. Just take a look at Microsoft’s racist Twitter chatbot which was shut down in less than a day, after being heavily trolled. Once it was released, users started corrupting the bot by teaching it racist and sexist terminology while trying to alter its output. Just think about the reputational impact this bot had on the company’s name each hour it was running.

The staging environment will never truly reflect the conditions in production. The trained data may suffer from serious bias, resulting in surprising outputs. Amazon’s recruiting tool is a perfect example of this case. Between 2014 and 2017, Amazon’s HR group used an AI-based tool to review resumes and make recommendations during the recruiting stage. It appears this tool was trained on resumes submitted to Amazon over the past decade and therefore preferred male applicants over women as they were the majority in those positions. The machine in this case just did what it saw and was trained for, or in other words – GIGO (Garbage in, Garbage out) – nonsense input will almost always produce nonsense (or biased) output.

In addition, these systems are characterized by non-deterministic output, which increases the natural fear of unexpected errors.

The clustering problem in Attack Analytics

We faced a similar challenge in our Attack Analytics solution when reaching stage five in the machine learning project cycle. Attack Analytics condenses thousands upon thousands of alerts into a handful of relevant, investigate-able incidents, automating what would take a team of security analysts days to do, and cutting the investigation time down to a matter of minutes.

This product is dealing with a clustering problem, which is a process of dividing a dataset into groups such that members of each group are as similar as possible to each other, or in our case – describes the same cyber-attack. 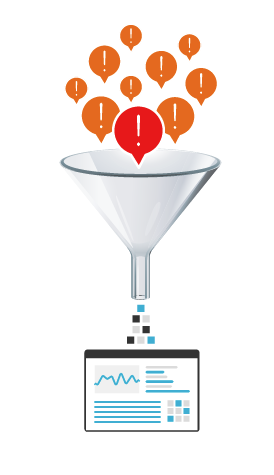 The similarity can be in different dimensions on every attack. Sometimes the origin of the attack may be common (IP, country, TOR-based, etc.) and sometimes not (distributed attack). There are cases where the target (URL, files, host) is common and cases where scanners are involved. Other attributes may be the attack tool, type or timing (short/long attack, periodic, etc.).

So we formulated the objectives of the project, collected the data, cleaned and enriched it, and built a stream clustering algorithm that got positive feedback from our customers after launching it in May 2018. But are we done? Besides continuing to release new features, the next step, as we’ve seen, is establishing a mechanism for tracking and monitoring it in production mode.

How to measure success

Each problem category may have its own solutions and measures of success. In our case, we’ll discuss a method for monitoring the clustering solution. This unsupervised task has no samples label, meaning that we don’t have the “real answer” for an accuracy measurement. Our solution’s groups must apply two main conditions:

There is a perfect term for this – silhouettes. Let’s define the silhouette for each sample in our dataset.

For sample i let’s define a(i) to be the average distance of point i and all other points in the cluster it was assigned to. We can interpret a(i) as to how well the point belongs to its cluster. This is exactly the first condition we defined. We wish this number to be as small as possible for each point.

Similarly, let’s define b(i) as the average distance of point i to other points in its closest neighbor cluster. Of course, we wish this number to be as large as possible for each point. This will be our second condition, to be as far as it can from its closest cluster neighbor (and therefore, from all other groups).

Those attributes were demonstrated in figure 5. 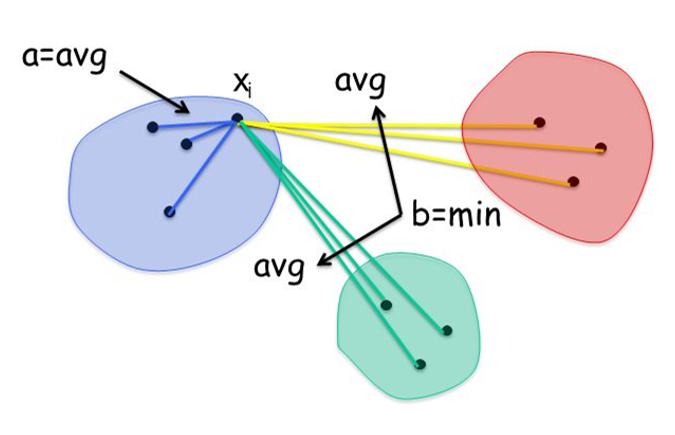 As we wish to have both small a(i) and large b(i) at the same time, let’s define the Silhouette of each point s(i) as:

For s(i) to be close to 1, a(i) must be small as compared to b(i), which means the point is very close to its cluster and far from other clusters. Hence, s(i) is the optimum result.

Similarly, negative s(i) means the point is closer to its neighbor cluster than to the cluster it was originally assigned. And what does si=0 actually mean? It happens when the point is in the middle of the ‘no man’s-land’ of the two groups.

When talking about the web application security domain we need to apply the distance function to the security alerts that we showed earlier. This function looks into the different dimensions of the attack – its source, type, target, tool, time, etc. Every cluster defines a group of similar attacks, according to these dimensions, or in other words an attack campaign. Having Attack Analytic clustering results, we can measure the a(i) and b(i) for every alert i, and its silhouette value.

Looking at figure 7, we can see that the blue cluster A and the orange cluster B don’t seem to have good separation. Remember that we wish to have small a(i), which is the average distance of alert i to all other alerts in its cluster, meaning the alerts describe the same attack campaign. As we expected, alert i has a small a(i) value as all the alerts have the same target, tool and type, and also their origin is coming from the same subnet.

In contrast, alert j has a silhouette value close to 1, as it is close to other alerts in the same attack (small a(j)) and far from alerts of other attacks (large b(j)). 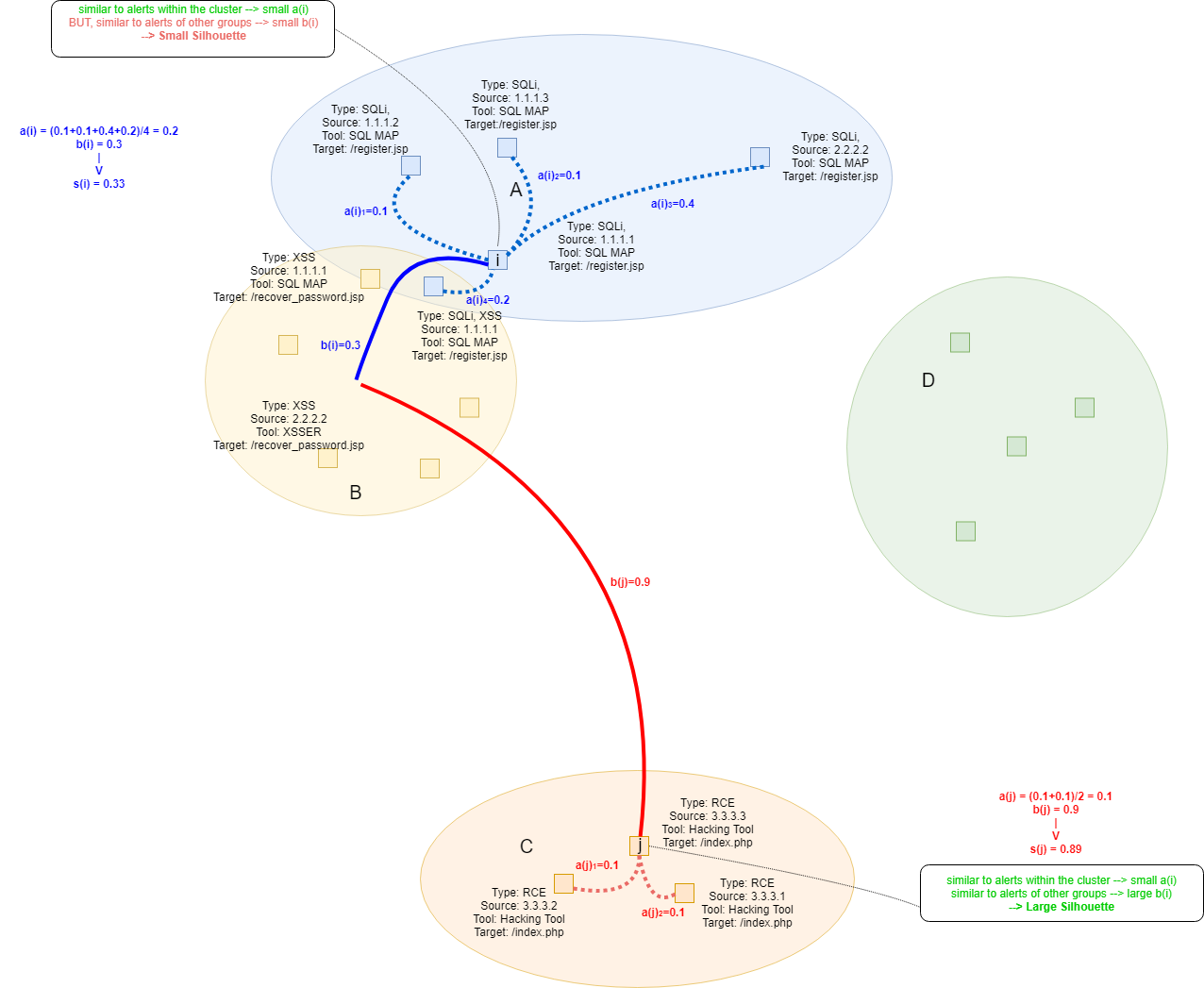 Having a grading mechanism for our AI-based system gives us the options for monitoring the clusters of our customers’ attacks. As the clustering algorithm is in streaming mode, just think of a periodic ‘health’ check for each customer and the option to respond when the results begin to start going down before getting the call from your customer. Another opportunity is to use it when adding new features in A/B testing, as you can measure how well you were before and after.

A machine learning system isn’t a regular application, so the responsibility for monitoring it doesn’t go automatically to the DevOps team. It’s important that the validation of a proper operation of these systems will be an integral part of the development cycle and will involve both developers and data scientists.