Home > Blog > Why DDoSers Have Their Eyes on SaaS, and What You Can Do About It

Why DDoSers Have Their Eyes on SaaS, and What You Can Do About It

In recent years Software as a Service (SaaS) emerged as one of the most targeted online industries. This isn’t particularly surprising as, for several key reasons, SaaS companies are especially vulnerable to DDoS attacks.

The reason SaaS companies are attractive targets to DDoS attackers is simple: service availability is a critical part of their business model.

Simply put, if a service is unavailable, SaaS customers are not getting their money’s worth, while still paying a retainer fee for the product.

In such situations customers are much more likely to become dissatisfied, to a point where they decide to take their business elsewhere, severely impacting the SaaS company’s revenues and reputation.

Going offline is bad for any organization, but for a SaaS company, its entire business can quickly be in jeopardy.

Perpetrators are often aware of these sensitivities and therefore are more likely to exploit this weakness- especially if they’re motivated by money.

They assume that SaaS companies can’t afford downtime that might stretch out for days; that it would be cheaper to pay a ransom demand and end the attack.

Another reason miscreants go after SaaS outfits is to make headlines. When a large one gets knocked offline- leaving thousands of customers without access to key products- it’s often reported by tech sites with global readership, such as TechCrunch , Mashable or CNET.

A high-profile attack like that is a shortcut to instant notoriety’s way to gain respect of their hacker community peers, generate buzz on social media and further publicize their name (e.g., Lizard Squad). 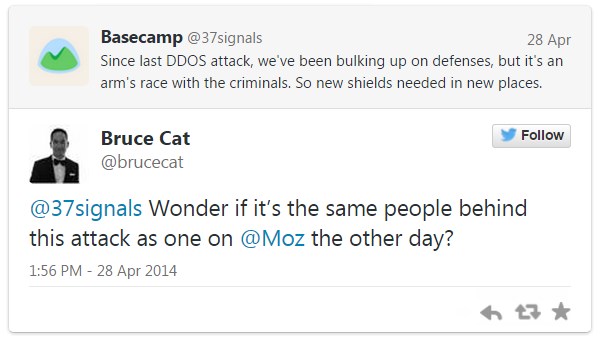 The former are typically volumetric threats that target the server infrastructure, aiming to clog the network pipes (e.g., SNMP amplification attack). The latter are stealthy attacks, executed by malicious bots that target the application itself (e.g. ,HTTP flood).

While both threats have the ability to knock a SaaS company offline, application layer attacks are usually a bigger threat. This is because SaaS applications are generally much more complex than regular websites, as well as the fact that some of them are using OS applications with known vulnerabilities.

Among the most common SaaS platform threats are DNS floodsâ€”a layer 7 DDoS assault directed at name servers, typically one of the weakest SaaS infrastructure links.

Because they often reside outside of the core infrastructure, name servers often aren’t covered by the same security measures as their web application offerings, resulting in easier targets to penetrate.

Moreover, DNS floods don’t require a full three-way handshake, so attackers can use spoofed IPs to circumvent common defense measures (if they even exist).

Mitigating a massive DNS flood, peaking at over 25Mpps (million packets per second)

How SaaS Companies Can Protect Themselves

With an average DDoS attack cost reaching $40,000/hour, not including indirect costs such as damage to reputation and customer satisfaction, SaaS companies can’t afford to not implement DDoS mitigation solutions.

The first precautionary step you should take is to create a DDoS response plan to help you do the following:

Having said that, the DIY approach will only take you so far. Ultimately, what you`ll really need to do is implement a dedicated DDoS protection solution, which can identify and counter the threat.

Incapsula’s Guide to Protecting SaaS Apps from DDoS Attacks is filled with useful information to help SaaS companies understand exactly where they’re vulnerable to DDoS attacks, as well as recommending what they can do to integrate DDoS mitigation with existing business strategy. Download your free copy today, and contact us any time you have additional questions.