When our first custom hardware affectionately nicknamed Behemoth was introduced in 2014, Incapsula throughput to mitigate DDoS attacks increased to 170 Gigabits per second (Gbps). That platform soon mitigated a DDoS attack which was considered huge at the time, and has continued to mitigate growing attack volumes. With the growth of the internet and the number of connected devices, the scale of attacks has constantly increased. After accomplishing our initial goals in Behemoth, our engineers got working to further improve the platform. The result of their efforts is the recent introduction of Behemoth 2. 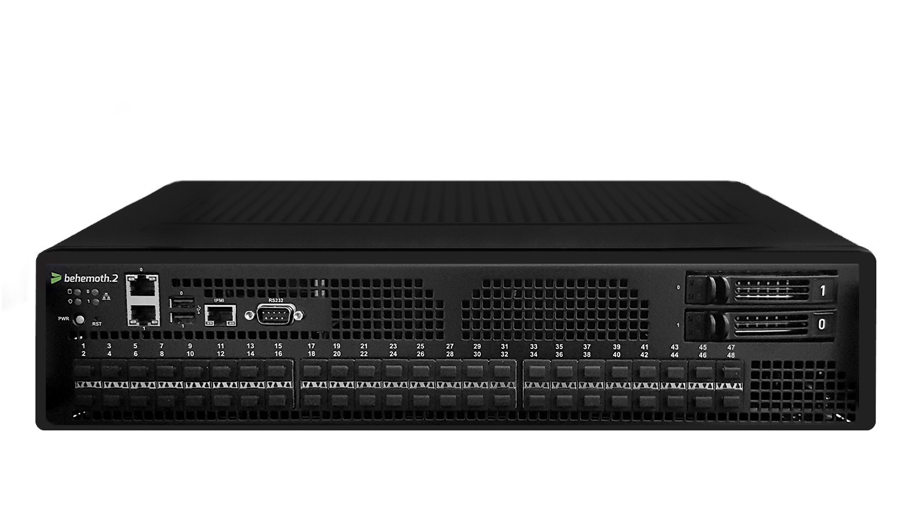 The platform was designed with the following goals in mind:

The Wisdom of Hindsight

In the original design shown below, we see that traffic is constantly monitored via the sampling interface. Once a DDoS event has been identified, Behemoth will request the traffic suspected to be malicious to be diverted for mitigation via the CLI-based (command line interface) control path. The switch will then divert the suspected traffic for mitigation based on the control instructions it receives.

To understand the improvements, we must understand the limitations of the original Behemoth. In revisiting the schematic, we were able to identify some weaknesses in the design:

Under the hood, Behemoth 2 is a custom-tailored appliance which utilizes the Intel E5-2690 CPU and pairs it up with the Intel Alta: a high-performance, highly programmable switch silicon. The platform supports up to 64*10 GbE Ethernet ports, with 20 internal ports to the host and 44 external connections providing a total capacity of 440 Gbps, and a packet per second capacity of over 650 Mpps. The internal switch has the TCAM capacity for thousands of rules, each of them able to match packets based on layers 2-7.

In the new configuration, all traffic to the PoP is redirected to Behemoth 2.

As shown in the figure, all the traffic entering the PoP is diverted to Behemoth 2, which will then apply internal sampling for DDoS detection. It also controls the Alta switch to divert the traffic for software mitigation. Alternatively, the mitigation service can install rules on the switch to perform the packet drop in hardware.

With the implementation of the Behemoth 2 platform, we were able to make the following changes.

Taking a deeper look into the appliance, we can identify the different flows for traffic traversing Behemoth 2.

During the recent 650 Gbps DDoS flood, more than 150 Mpps (million packets per second) were received at the Incapsula PoPs. 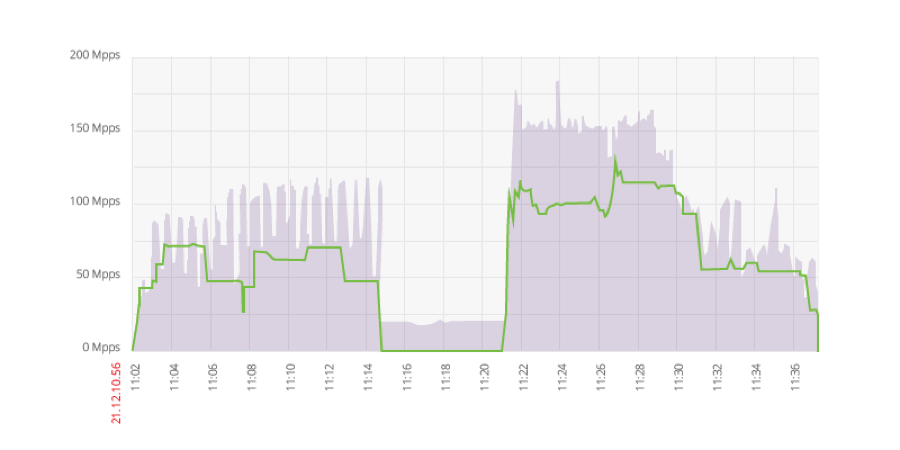 Behemoth 2 mitigated the 650 Gbps DDoS flood by offloading traffic to the switch leaving the CPU unaffected by the attack.

The attackers started out with ~100Mpps, which had no impact. They then took a few minutes to regroup (11:15-11:21) and came back in full force. The green line depicts offloaded PPS, roughly 100-115 Mpps were offloaded to the switch, leaving the CPU mostly idle.

The full capacity of even a single Behemoth 2 has not been required to fend off a DDoS attack, but it’s good to be ahead of the game. With the capacity and scalability, Incapsula is positioned to protect its customers from DDoS attacks that will continue to grow in scale and sophistication.

And finally, here’s what Behemoth 2 looks like in action!